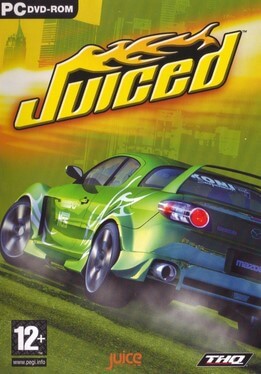 Juiced is a racing video game by British studio Juice Games for Microsoft Windows, PlayStation 2, Xbox, and mobile phone. The game was delayed for release in 2004 because its original publisher, Acclaim, went bankrupt. Juice Games and Fund 4 Games retained ownership of the property and sold the game to THQ, who funded the project for a further six months of improvements. In early 2006, British software publisher Focus Multimedia re-released the PC version of Juiced at a new budget price as part of its "Essential" games series. The game offers different modes including career and arcade that present the player with challenges of increasing difficulty. The player can customize the car to suit their style and unlock new ones in arcade mode. The game features nitrous boosts, similar to that of other racing games. Juiced went to number one in the United Kingdom MCV sales charts and its first version sold 2.5 million units.

The game is set in a fictional Californian city called Angel City, based on Los Angeles. Angel City is comprised of eight districts, San Ricardo, Campbell Hills, Downtown, Angel North Central, Angel Westside, Southside Beach, East Angel Island and Anderson. The districts are controlled by rival crews in the game, and the player can host events at different districts if they get enough Respect.

There are four different racing types:

There are not only races in which every racer is a rival, but also crew races comprising two racers from one crew (2 vs 2 vs 2, as well as 2 vs 2), as well as composed of three members of the same crew (3 vs 3). In these races, all of the racers of one same crew must cross the line before any other crew does to win the race.

In the Career mode, if the player achieves a minimum of 600 of respect (explained below) with a certain rival crew, they can participate in Pink Slip races (Sprint, Point-to-point or Circuit races in which both racers bet their cars).

The Custom Race mode features an Alone mode as well so the player can race any circuit with no racers, no time limit and no laps count.

Juiced was originally intended to be published by Acclaim Entertainment, and released for the PlayStation 2, Xbox and PC in late 2004. However, the game was caught up in Acclaim’s Chapter 7 bankruptcy issues and never released by them. Game magazines around the world wrote reviews on nearly finished copies of the game. It was then picked up by THQ as the new publisher and later released in 2005.