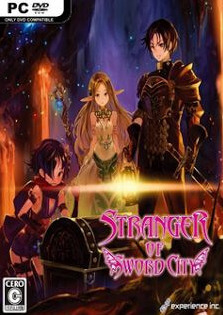 Stranger of Sword City (剣の街の異邦人, Ken no machi no kotokunibito), originally titled The Stranger in Alda, is a dungeon crawler role-playing video game developed by Experience, developer of Demon Gaze, for Microsoft Windows, Xbox 360, PlayStation Vita and Xbox One. The Japanese Xbox 360 and Vita versions have different subtitles: the Xbox 360 and Windows version is subtitled White Royal Palace (白の王宮, Shiro no ōkyū), whilst the Vita version is subtitled Black Palace (黒の宮殿, Kuro no kyūden). The Xbox 360 version was released in Japan on June 5, 2014, and the PC and PS Vita versions followed in August 2014 and January 2015. The game was released internationally in 2016.

Stranger of Sword City is a dungeon crawler style role-playing video game. Players progress through the game by navigating through dungeons laden with hazardous booby traps.

Stranger of Sword City was originally announced in June 2012 with a 2013 release date. In April 2013, director Motoya Ataka announced that the game was "in the middle stage of development", with the music " about 80% complete." However, it was announced in September 2013 that due to delays, the game has been postponed, and will instead release in early 2014. In September 2013, Experience asked in for fans to submit concepts for boss characters, including "boss monsters for the end of the story, a top class boss for the middle of the game, a boss that has a unique fighting space like underwater or outer space, a flying or floating boss, a monster with scales, and "god" tiers for regular enemies." A teaser trailer was announced on February 7, 2014. It was also announced that the game, which was originally only planned for release on the PC and Xbox 360 platforms, would also be available for the PlayStation Vita. A new version of the game with a new graphical style, was released in March 2016 for the Xbox One.