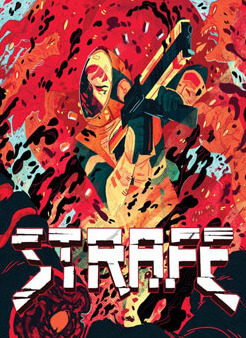 Strafe (stylized as STRAFE) is a first-person shooter video game developed by Pixel Titans and published by Devolver Digital. The game is an homage to 1990s first-person shooter video games, such as Doom and Quake, advertised as to have "bleeding edge graphics and gameplay", citing the year 1996. It was released worldwide on May 9, 2017. Linux support was added on March 27, 2018.

Strafe is a first-person shooter with roguelike elements. There are four stages containing 3-4 levels each, all of which are semi-procedurally generated. Upon loading into each zone, the map is generated by pulling a set of rooms from a pool and arranging them randomly. The enemies, upgrades, and merchants among other assets are also randomized and placed within the zone. Upon death, upgrades will be lost and levels will be re-arranged once more, but the player may be able to access teleporters to unlocked stages from the hub spacecraft.

From the hub spacecraft, the player chooses a primary weapon at the beginning of each run from a shotgun, a machine gun or a railgun. Each weapon has a primary and secondary fire method, with power-up items allowing the weapon to become much more powerful. A variety of weapons can be picked up within the levels when dropped from enemies, which generally have limited ammo and can be thrown when empty for additional damage. Merchants appear, from whom the player can buy upgrades.

The game features digital gravity and a dynamic blood splatter system. Environmental effects such as acid and fire appearing from enemies or destruction of objects are a further obstacle and adds gameplay depth, where damaging pools of acid can be nullified by covered it in the blood of enemies. Enemies range from zombies, to robots and aliens.

The unnamed player character is a "scrapper", a space explorer who collects materials to use as currency. An unknown party sends them on a scavenging mission to a ship known as Icarus on the far reaches of the known universe. However, once the player arrives on Icarus, they find that something on-board has gone awry, and must combat a deadly alien threat.

The game had a successful crowdfunding campaign, reaching $207,000 of a $185,000 goal on Kickstarter. The Kickstarter campaign video parodies over-the-top video game commercials of the 90s. The video was well-received, the game's designer Thom Glunt attributes his experience in commercial and video production to its success. Though the video was humorous, Glunt stresses that Strafe is not a comedy game, "It's a balls-to-the-wall straight-up action game." Strafe was featured at the 2015 Games Developers Conference with a playable demo.

Gamespot awarded Strafe a score of 8 out of 10, saying "Strafe wears its influences on its sleeve but stands on its own as a fun, intense, and fast-paced shooter with distinguishable charm."