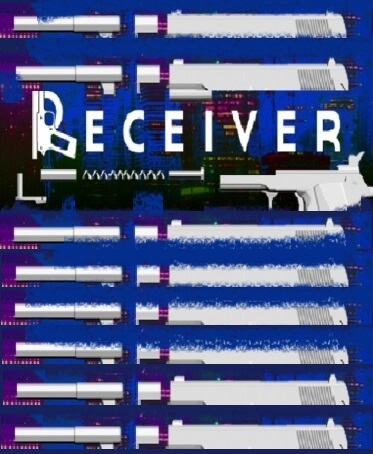 Receiver is a first-person shooter video game developed by Wolfire Games. The game attempts to portray realistic gun mechanics through a unique reloading system, where each step of reloading is assigned a different button. The player scavenges items and audio tapes which reveal the story in a procedurally generated world.

Receiver was released in June 2012 for Linux, Microsoft Windows, and Mac OS X. In 2013, the game is available as a free copy when purchasing the other Wolfire Games video game Overgrowth.

In Receiver, players must search for eleven audio tapes from around a procedurally generated world, randomly arranged after each death. Ammunition and flashlights are scattered throughout the world as well. Players start with a random handgun, either a Smith & Wesson Model 10 revolver, a Colt M1911A1 semi-automatic pistol, or a selective fire Glock 17 pistol with an automatic sear. Players are also given a random inventory of ammunition and/or spare magazines for their weapon. Players may also start with a flashlight. While searching for tapes, the player encounters stationary sentry turrets and mobile hover drones that attack the player. A single hit to the player will kill them. Shooting these automated defenses can disable them, with shots to vital components, such as cameras, weapons, a motor, or a battery scoring significantly more damage. If a player dies, they lose all progress and the game is reset with a new randomly-generated level layout, spawn position, and inventory.

A core element of the game is how the player fires and reloads the handgun. The gun has to be used in a semi-realistic fashion, meaning that all aspects of reloading the gun have to be enacted individually with different key presses. Rather than finding magazines as seen in most shooters, the player finds cartridges which must be individually loaded into the revolver chambers or pistol magazines. In-game actions mapped to individual key presses include, but are not limited to: removing the magazine from the pistol, inserting a cartridge into a magazine, inserting a magazine into the pistol, pulling back the slide, cocking the hammer, toggling the safety, inspecting the chamber, releasing the slide stop, and spinning the cylinder of the revolver. To emphasize understanding of the firearm, the player's handgun starts in a random condition; the magazine or chamber may be loaded or empty, the slide may be locked or unlocked, and the safety may be on or off.

Receiver was originally created as part of the 7 Day FPS Challenge in 2012, built on "gun handling mechanics, randomized levels, and unordered storytelling."

The game was released in June 2012, and on Steam in April 2013 after being accepted as part of Steam Greenlight.

The first content update for Receiver was released on September 3, 2012, and added a flashlight, a Smith & Wesson Model 10 revolver, and a Glock 17, among other features.

The source code of the game is available since 2012 on GitHub under non-commercial license conditions.

The game was last updated on 9/14/2019, which added an entire graphics overhaul as well as improving the game's back drop.

In Destructoid's 8.5/10 review, they said that "successfully reloading a gun for the first time through sheer muscle memory is easily one of the greatest feelings in gaming", concluding that "Receiver is one of those games that feels so incredibly satisfying once it is finally understood".

The Verge described the game as "wrapped up in a slick package that really makes you feel like a cool, infiltrating spy."