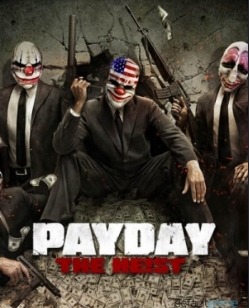 Payday: The Heist is a cooperative first-person shooter video game developed by Overkill Software and published by Daybreak Game Company. It was released on 18 October 2011, for PlayStation 3 in North America and 2 November 2011, in Europe. It was released on 20 October 2011, for Microsoft Windows via Steam. The game runs on the Diesel game engine. It contains seven different missions (including the free No Mercy downloadable content (DLC) released on 25 July 2012), with each mission containing random elements which alter the gameplay in subtle ways with the aim of enhancing replayability. On 7 August 2012, the Wolf Pack DLC was released on PlayStation 3 and PC. This DLC adds two heists, additional weapons, increased level cap, and a player upgrade tree.

In Payday: The Heist, players use a variety of firearms to complete objectives (usually centered around stealing a certain object, person, or a particular amount of money). The game plays from the first person perspective, but offers a few twists on the standard FPS formula. Killing civilians is punished, instead players may take a limited number as hostages. Should any player get arrested (after taking enough damage and not being "revived" in time) during the heist, one of their teammates may release a hostage, allowing a trade to take place which allows a single player to be released. While playing the levels, players will notice a lot of variation in a single level, as there are often a large number of random events programmed in. An example of this is the location of the bank manager in First World Bank.

The game focuses on four robbers (Dallas, Hoxton, Chains, and Wolf) who team up. Their first heist took place at the First World Bank, where they entered a vault by using thermite hidden on the inside of a photocopier and stole a large amount of money. A post-game message congratulates the group, telling them that they are "set for life", but recommends more heists, including robbing drug junkies in an abandoned apartment complex and ambushing a prisoner transport in heavy rain weather, simply for the enjoyment of the players.

Overkill Software promised DLC before the game's launch. In October 2011 the first of these was revealed to include a Nixon mask, new equipment, skills, characters, and heists. This DLC is the Wolf Pack, and it released on 1 August on the European PlayStation Store and on 7 August for the North American PlayStation Store and PC. The new content included a new Technician skill tree that gave the players access to the AK, the GL40 and the Stryk pistol as well as adding in a sentry gun. Also included were two new heists, Counterfeit and Undercover. On 25 July, the No Mercy Hospital DLC was released, establishing a link between Left 4 Dead and Payday (although this has been stated to be non-canon). This DLC included the No Mercy heist as well as the Infected mask set for players with Left 4 Dead installed on their computers. On 17 October 2014, Payday: The Heist was free on Steam for 24 hours.