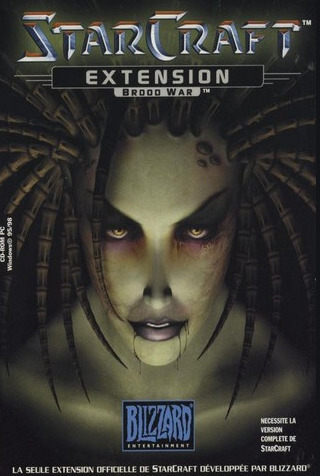 StarCraft: Brood War is the expansion pack for the military science fiction real-time strategy video game StarCraft. Released in December 1998 for Microsoft Windows and June 1999 for Mac OS, it was co-developed by Saffire Corporation and Blizzard Entertainment. The expansion pack introduces new campaigns, map tilesets, music, extra units for each race, and upgrade advancements. The campaigns continue the story from where the original StarCraft ended, with the sequel, StarCraft II: Wings of Liberty, continuing from the conclusion of Brood War. The expansion was released first in the United States on December 18, 1998.

Brood War was critically well received, with reviewers praising it for being developed with the care of a full game rather than as an uninspired extra. As of May 31, 2007, StarCraft and Brood War have sold almost ten million copies combined. The game is especially popular in South Korea, where professional players and teams have participated in matches, earned sponsorships, and competed in televised matches.

StarCraft focuses around three distinct interstellar species: the psionic Protoss, the adaptable Terrans, and the insectoid Zerg. The game revolves around players collecting resources to construct a base, upgrade their militaries, and ultimately conquer opponents. Brood War's gameplay remains fundamentally unchanged from that of StarCraft, although it made small alterations to unit costs and some abilities, and added some new units. These changes make rushing tactics—a factor that gained some criticism in the original StarCraft—less practical. The single-player campaign has an increased difficulty; missions are no longer entirely linear, and a greater focus on strategy is needed to complete missions. In addition, the game's artificial intelligence (AI) has been augmented so that AI-controlled players are more intelligent and tend to use tactics more effectively.

Brood War introduces seven new units. Each race is given access to a unique ground unit: the Zerg can create a defensive unit that can attack from the concealment of its burrow, while the Terrans can train combat medics. The Protoss are able to produce dark templar units, a powerful cloaked melee unit only given to the player in special missions of StarCraft. Protoss players can merge two of these units to create a special spellcaster unit. Each race is also given access to a dedicated air-to-air attack unit.

Brood War takes place in the StarCraft universe, set around the early 26th century. Terran exiles from Earth have colonized a distant area of the Milky Way galaxy called the Koprulu Sector, having established several governments. Eventually, a civil war breaks out and ends with the formation of the Terran Dominion. However, humanity soon becomes caught in a war between the Protoss and the Zerg, which culminates at the end of StarCraft with the death of the Zerg leader, the Overmind, on the Protoss homeworld of Aiur. Without the Overmind to command, the Zerg rampage mindlessly across Aiur, while the cerebrates—the secondary commanders of the Swarm—attempt to regain control. After the discovery of alien life in the Koprulu Sector, the United Earth Directorate (UED)—the international body governing Earth—decides to send an expeditionary force to secure the sector and prevent the aliens from finding Earth. Brood War begins two days after the conclusion of StarCraft.

The player assumes the roles of three anonymous characters over the course of the game. In the first campaign, the player assumes the role of a Protoss fleet commander. The player's character is commanded by Zeratul and Aldaris, two adversaries from StarCraft who have since reconciled their differences to lead their people in the face of the rampaging Zerg. They are joined by Jim Raynor, a Terran rebel on the run from the Dominion, Artanis, the previous Executor of the third campaign of StarCraft who has recently been promoted, and Raszagal, the matriarch of the dissident dark templar faction in Protoss society. The second campaign sees the player as a captain in the UED expeditionary force, reporting to the fleet's admiral Gerard DuGalle and his vice-admiral Alexei Stukov. To secure the sector, the UED plans to overthrow the Terran Dominion and its emperor Arcturus Mengsk, and are assisted in this by Samir Duran, a mysterious psionic ghost espionage agent, and his group of anti-Dominion rebels. The final campaign has the player assume the position of a Zerg cerebrate, a commander within the Zerg Swarm. The player is put under the control of Sarah Kerrigan, a Terran who was infested by the Zerg in StarCraft.

The story of Brood War is presented through its instruction manual, the briefings to each mission, and conversations within the missions themselves, along with the use of cinematic cut scenes at the end of each campaign. The game itself is split into three new episodes, one centering on each race.

In the first episode, Aldaris, Zeratul, and the newly promoted Artanis work to evacuate the surviving Protoss from their devastated homeworld through a warp gate to the dark templar homeworld, Shakuras, where they meet the matriarch of the dark templar, Raszagal. Although the Zerg are able to follow the Protoss to Shakuras, Raszagal informs the survivors of a Xel'Naga temple on the surface of the planet with the power to scour the Zerg from the surface if activated. With Zeratul and Artanis reluctantly partnering with Sarah Kerrigan, who informs them of a new Overmind growing on Char, the player joins them in an operation to recover two key crystals (Khalis and Uraj) necessary to operate the temple. Upon their return, it is revealed that Aldaris has begun an uprising against the dark templar over their alliance with Kerrigan. The uprising is crushed, and Aldaris is killed by Kerrigan, who reveals that her motives are to ensure the destruction of the Zerg cerebrates on Shakuras so she can gain control of the Zerg herself before departing the planet. Despite knowing that activating the temple will accomplish Kerrigan's objectives, Zeratul and Artanis proceed with little other choice, wiping the Zerg off Shakuras' surface.