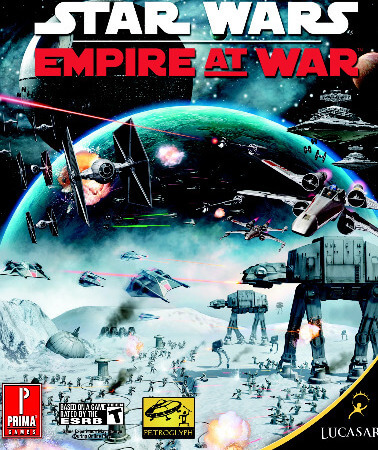 Star Wars: Empire at War is a 2006 real-time strategy video game developed by Petroglyph Games and published by LucasArts. Set between Episode III and Episode IV, it focuses on the fledgling struggle between the Empire and the Rebels. It uses Petroglyph's game engine Alamo. In October 2006, an expansion titled Star Wars: Empire at War: Forces of Corruption was released. On May 31, 2014, online functionality, including network multiplayer and wireless chat, was discontinued after Glu Mobile's purchase of GameSpy and the subsequent shutdown of all game servers. As of September 1, 2017, the multiplayer has been re-enabled on the Steam version as well as workshop support being added.

Galactic Conquest is the sandbox campaign, in which the player controls either the Rebel Alliance or the Empire. A weaker, neutral faction of Pirates exists, but makes no attempt to battle the Rebels or Empire unless attacked. Each faction has at least one of three broad objectives for Galactic Conquest, which vary depending on which scenario is being played: kill the enemy leader (Mon Mothma or Emperor Palpatine), protect or destroy the Death Star, or completely remove the other faction from the campaign map. Grand strategy, production, and resource management are facilitated through a three-dimensional galactic map. The player receives funds from planets they control and from mining facilities. Credits are used to research technology, build defenses and vehicles, and train troops. Each planet confers different advantages to its owner, even though some bonuses are specific to each faction (for example, controlling Kuat reduces the price of Imperial Star Destroyers by 25 percent).

When enemy forces meet (either fleets in space or ground forces landing an enemy planet) a battle ensues. The player(s) can use only the equipment they brought to the battle (be it an X-wing squadron or an AT-AT). Factions must battle across both space and land maps. The defender may also use any buildings (land) or their space station (space) if they have constructed them. In each battle, each side may only have a certain number of units on the field at a time; the rest are retained as Reinforcements, which can be called in any time to designated areas when allowed. In land battles, a player can field more units at a time if they capture Reinforcement Points.

The storyline campaign follows a semi-open linear path, where the given side must complete sequential mission objectives (such as stealing X-wing prototypes). Campaign missions build up to the plot of Star Wars and eventually, the Battle of Yavin. The campaign is very similar to Galactic Conquest, although the Galactic Map is gradually opened for play as the player completes scripted events and completes missions.

Skirmish mode is the familiar, classic RTS mode. Skirmishes come in two types: land and space. In land skirmishes, all players start with bases and must research upgrades and capture reinforcement points while fighting to destroy the enemy's base or command center. In space skirmish mode, all players have a space station that can be upgraded. The player buys land or space units to attack the enemy with until the enemy base/space station is destroyed or the enemy forces are destroyed. The player can advance in technology levels to access more powerful ships as the player gains more money. The player can build more buildings and defenses, and the space station can also be upgraded to better defend itself without requiring the player to leave ships behind to defend it. Skirmish battles require the least time investment, so it is better suited toward casual players. Maps can support two, three, or four players, and the difficulty can be switched between easy, medium or hard.

All modes are played in real time. Days on the galactic map pass continually. When a battle occurs, galactic time is paused while the battle is waged. After the battle, the galactic day timer resumes. When playing against the computer, the player can accelerate time or pause time on both the galactic and skirmish maps.

All modes also make use of important Star Wars characters, such as Darth Vader, as Heroes. Each Hero is a single, moderately powerful unit with special abilities. For example, Obi-Wan Kenobi, Emperor Palpatine, and Darth Vader can use the Force. Some characters can be used in both land and space battles, (e.g. Darth Vader becomes a special TIE fighter unit in space), while others can be used only on land or only in space (a land-only Hero will remain on board a landing craft or command ship during space battles and have no use of their special abilities).

The game's plot is that of the Galactic Civil War and the construction of the Death Star. It occurs during the events leading up to A New Hope.

In the Rebel campaign, the fledgling Rebel Alliance begin with an attack on the shipyards at Kuat introducing the player to basic space combat before infiltrating the planet of Wayland on a basic ground combat mission. The campaign explores how the X-wing fighter is pressed into the service of the Rebel Alliance, the liberation of Kashyyyk, the first whisperings of a brand new Imperial superweapon and ultimately the Battle of Yavin.

The Imperial campaign features Darth Vader and his search for the fledgling Rebel Alliance, interspersed with missions to help complete construction of the Death Star. It then transpires that the plans for the Death Star have been stolen so the player has to seek out the traitor who has passed the plans to the Rebels, intercept Princess Leia and then use the Death Star to crush the Alliance once and for all.