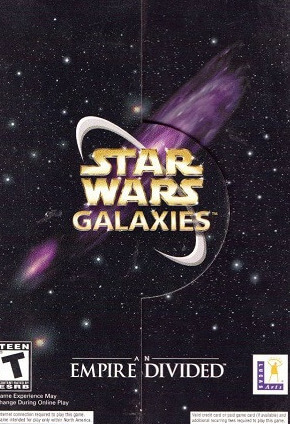 Released on June 26, 2003 to much critical acclaim, it spawned three expansions through 2005. The game was completely overhauled in the last expansion, which frustrated many longtime subscribers. Star Wars Galaxies continued operation for six more years.

The servers shut down on December 15, 2011, just 5 days prior to the release of Star Wars: The Old Republic. Notwithstanding the game's closure, there are several private emulator projects in various stages of development that intend to allow users to experience Star Wars Galaxies in different incarnations of the game's existence.

There were nine professions in the game after the NGE (34 pre-NGE): Jedi, Bounty Hunter, Smuggler, Commando, Spy, Officer, Medic, Entertainer and Trader. Trader was further divided into four separate professions: Domestic Goods (tailoring and cooking), Engineering (droid and vehicle crafting), Structures (shipwright and architect), Munitions (weapons and armor crafting). Progress in these professions was divided into three separate experience source groups: combat, crafting and entertaining. In addition to these professions, a character could also pursue three optional (they could be advanced in regardless of chosen main profession nor progress in it): Pilot, Chronicler and Politician. During the Pre-NGE, customization was easier due to "skill points" which could be spread amongst many different profession trees.

Chronicler sub-profession allowed to build holocrons with player created quests: placed props (temporarily existing in game world items and NPCs), objectives and narration. Advancement in profession is based on obtaining experience via constructing holocrones and having other players complete and rate such creations.

Politician profession allowed users to create and manage a player city. Acquired and completed automatically when a player places a structure belonging to him.

Characters could specialize in three different areas of their main professions by selecting "expertise" options, including Beast Mastery (BM). The Trader professions shared not only BM expertise but also general expertise (which include specializing in resource sampling and mining via player placed structures - harvesters, reverse engineering, manufacturing via player placed structures - factories and vendors maintenance), third expertise consists of two given trader type specific areas of crafting specialization. All professions were combat capable although with definite bias towards combat professions prowess, followed by entertainers (HtH combat based on Drama expertise and/or BM expertise) and traders (combat based solely on pet crafted droids or BM expertise). Although some of combat professions are more prone to fall into generic roles of tank/dps/support all of them can specialize via expertise and correctly built items configuration (armor/clothing and weaponry is entirely player created and developed; its quality, enhancements and efficiency based on crafter's equipment and quality and proper composition of resources; drop and quest reward items are sub-par). This system allows the combat to be more balanced between different professions, while retaining variety of playstyles. The only generic role reserved to single profession is healer, as only Medic can heal another character. However all combat professions have sustainable self healing option.

The Jump to Lightspeed expansion made individual ships attainable by players for the first time. This allowed players to acquire and pilot ships of various sizes. Ships ranged in size from small one-man fighter craft to larger gunships with up to three decks. Some players choose to play most of the game in space, while others play in both space and planetary settings. The TCG has added in a few other ships, as well as certain updates.

With the NGE, ground combat was changed to real-time and similar to a first-person shooter. The player must aim a targeting reticule at a target and left-click the mouse to fire. Auto-aim and auto-fire features are available, creating a more traditional combat experience, but players eschewing those options are rewarded with an increased chance to do maximum damage. As characters gain levels, they gain access to additional combat abilities called "specials" which are activated by using the right mouse button or by clicking the ability on a toolbar. These specials usually have a cool-down period. In addition to providing especially powerful damage attacks, specials are also used to heal, buff, debuff and crowd control. Players gain the ability to use more powerful weapons as they advance in level. Players also earn "Expertise Points" as they level up which they can use in their professions expertise "tree". The player can allot 45 points into various abilities and attributes to make their characters more diverse, from weapons specialties to healing and armor proficiency. Once a character reaches the max level 90 they would be able to do "Heroic" missions with a group of up to 8 other players. Before you could enter a Heroic mission the character has to complete a pre-quest that would unlock the quest and give permission to enter the instance. To acquire the mission you had to speak to a certain NPC to start the quest and after completing granted access. The five heroic missions were: Tusken Invasion, IG88, Axkva Min, Imperial Star Destroyer, and Exar Kun. After completing these heroics you were granted one token from that instance and would have to wait another 24 hours before re-entering for more tokens. Tokens collected would get you a 5 piece jewelry set that granted advantages for that profession.

Characters can erect, own and decorate a variety of buildings, including houses, cantinas, theaters, hospitals, guild halls and city halls. These buildings, when grouped, can be organized into cities. Players hold election via ballot box for Mayor. Elected mayors grant city members certain rights to place structures within the city and disallow the use of various civic structures by individual players as needed. Elections are held every three weeks. If another player wishes to run for mayor they can add their name at any time to the ballot box to run against the incumbent. As cities grow in population, they become eligible to add services and facilities such as vehicle repair garages, shuttleports, cloning facilities, hospitals, cantinas and garden displays. They can show up on the planet maps alongside canonical cities such as Theed and Mos Eisley.

The gameplay design encouraged realistic social institutions such as a dynamic player economy and other real-life social phenomena like a complicated division of labor. According to Star Wars Galaxies and the Division of Labor, the division of labor in Star Wars Galaxies around April 2005 produced in-game results similar to those in real life. Galaxies' original game design socialized players to specialize their characters by mastering one or two professions, and to join guilds, in which players relate to one another primarily in terms of their professions.