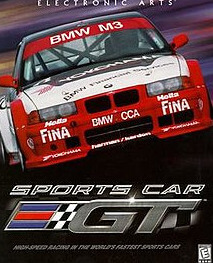 Sports Car GT (SCGT) is a racing game based on GT racing. It was published by Electronic Arts (EA) and developed by Image Space Incorporated for Microsoft Windows, and Point of View for PlayStation. Both editions of the game feature co-development by Westwood Studios.

The "time trial" mode lets the player take the customised car saved in "season" mode and go after the track records.

(In this case, two-player)

Head-to-head: configure a race in a number of ways and challenge an opponent to a one-on-one race.

Pace car: similar to head-to-head, but the player and their opponent are joined by an experienced CPU-driver.

Pink slip: (two memory cards required) same as head-to-head, but races must be run with cars saved in season mode. At the end of the race, the loser's car is deleted from his or her memory card and saved to the winner's.

If the graphics add-on is selected by the user to be installed for SCGT, the game will show off enormously improved graphics. If the add-on is not selected by the user to be installed, the game's graphics show their age. It has various easily noticeable errors (many car's tires sink into the ground, and the shadows sit slightly above it). Typical polygon counts are in the low thousands. A major gripe of SCGT players is that the headlights have no effect on the dashboard view.

In 2005 the developers of Sports Car GT released the multi-class sim rFactor and the successor to the GMotor 1 engine first used in Sports Car GT for Windows.