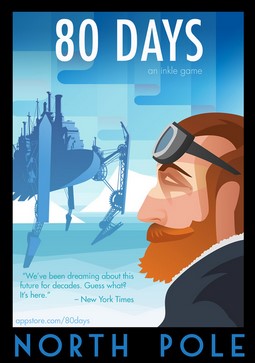 80 Days is an interactive fiction game released by Inkle on iOS platforms on July 31, 2014  and Android on December 16, 2014. It was released on Microsoft Windows and OS X on September 29, 2015. It employs branching narrative storytelling, allowing the player to make choices that impact the plot.

The plot is loosely based on Jules Verne's novel Around the World in Eighty Days. The year is 1872 and Monsieur Phileas Fogg has placed a wager at the Reform Club that he can circumnavigate the world in eighty days or less. The game follows the course of this adventure, as narrated by Phileas Fogg's manservant Passepartout, whose actions and decisions are controlled by the player.

After leaving London on an underwater train to Paris or a caleche to Cambridge, the player can choose their own route around the world, travelling from city to city. Each city and journey contains unique narrative content. The developers estimate that on one complete circumnavigation of the globe players will see approximately 2% of the game's 750,000 words of textual content.

In their role as valet, players must manage finances, their master's health, and time as well as buying and selling items in different markets around the globe. The choices made by the player in story sections can also have a large impact on how the journey proceeds.

The game has several secrets, Easter Eggs and hidden endings, as well as several references to Verne's works, including Twenty Thousand Leagues Under the Sea and From the Earth to the Moon. The game is also partly inspired by the steampunk genre, featuring such elements as sapient mechanical transport, hovercraft, submersibles and an entire city that walks on four gigantic legs.

The game has a rating of 88/100 and 84/100 for iOS and PC respectively on Metacritic. Phil Cameron of The Daily Telegraph described it as "one of the finest examples of branching narrative yet created". AppleNApps said "The story is absolutely superb with the little twists, and nuances on the classic to keep you constantly engaged to press onwards." PocketGamer said "It's rich with ideas, brilliantly written, and creates a world that you'll want to visit over and over again." Gamezebo wrote "80 Days has a solid amount of depth to it, and a great story...It's a challenge – but an intelligent one." GrabItMagazine said "the studio inkle deserves high praise for creating an accessible and, ultimately, fun way for people to experience Verne's classic work."

It was named as Time's 2014 Game of the Year. Despite being a game, The Telegraph newspaper also named it as "one of the best novels of 2014". The lead writer, Meg Jayanth, won a UK Writer's Guild award for her work on the project.

The game received four BAFTA nominations in 2015, for Best British Game, Best Story, Best Mobile Game and Game Innovation, as well as three IGF nominations for 2014, for Excellence in Design, Excellence in Narrative and in the Grand Prize category.