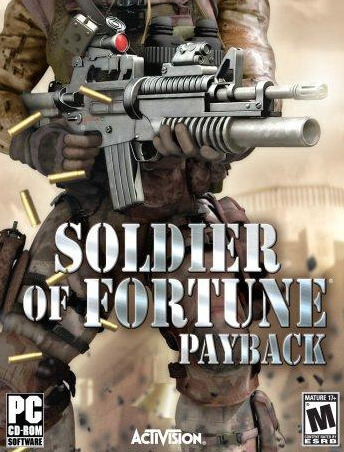 Soldier of Fortune: Payback is a first-person shooter video game and the third installment of the Soldier of Fortune game series, following Soldier of Fortune 2: Double Helix. It is the first game of the series released for the Xbox 360 and PlayStation 3. The game was released on 14 November 2007. The game involves a revenge plot against a worldwide terrorist organization. This time around, the player assumes the role of Thomas Mason rather than John Mullins.

Unlike the previous two Soldier of Fortune games, which were developed by Raven Software using the id Tech 2 and id Tech 3 engines developed by id Software, Payback was developed by Cauldron HQ.

The game was met with tepid, mostly negative reviews, with many saying the game looked pretty but the gameplay was uninspired. Like the other two games in the series, Payback had great character modelling and gore effects. Owing to the level of violence, the OFLC of Australia refused to classify the game. After the game was effectively banned in Australia, a modified version was released on February 28, 2008, that removed radical violence and dismemberment.

After freelance mercenary Thomas Mason (Kyle Herbert) is betrayed by his comrade during a mission, he swears revenge against a worldwide terrorist organization that brands all of its operatives with the same tattoo on their necks.

Up to 12 players can play online for the Xbox 360, PlayStation 3 and PC. Multiplayer has only five maps and game modes available, such as Deathmatch, Team Deathmatch, Capture the Flag, Demolition and Elimination.

The game was met with negative reviews. Most critics cited the great character modelling and gore effects. Jason Ocampo of GameSpot scored it a 4.5/10. He claimed that "This shooter is a great exercise in pattern memorization and trial-and-error gameplay." He also said it "looks pretty." Jay Frechette of 1up.com scored the game a 5.5/10. Frechette said "Soldier of Fortune doesn't cross the line of being a bad game, but it hardly ever breaks the surface of mediocrity either."

On October 16, 2007, the game was refused classification by Australia's federal classification board, the Office of Film & Literature Classification (OFLC). This effectively banned the game throughout Australia as video games which have been refused OFLC classification cannot be sold, advertised or imported. Activision modified the game to meet OFLC standards and it was re-classified with an MA15+ rating. This version does not include radical violence; dismemberment has been completely removed. Activision released the modified game in Australia on February 28, 2008.

Soldier of Fortune: Payback was banned in Germany, due to its high amount of violence.