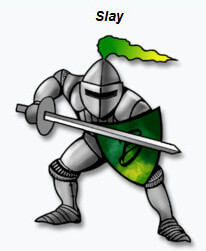 Slay is a shareware turn-based strategy game made by Sean O'Connor and released in the United Kingdom for Microsoft Windows in May 1996. It continues being ported to modern platforms, such as for Pocket PC in 2002, multiple mobile devices between 2007 and 2013, and on Steam in November 2016.

Slay is a hexagonal strategy game where your goal is to conquer the island by buying men and using them to capture your enemies' hexagons.