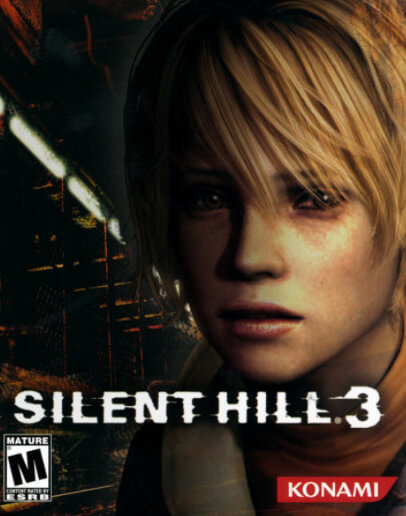 Set seventeen years after the events of Silent Hill in which Harry Mason defeats the god of the town cult and is given a baby girl to care for, Silent Hill 3 focuses on Heather Mason, a teenage girl raised by Harry in Portland. She discovers that the cult plans to use her to birth their god, and becomes caught in a conflict within the cult.

Silent Hill 3 was mostly well received by critics, especially in its presentation, including the environments, graphics and audio, as well as the overall horror elements and themes that are continued from past installments, although there were minor criticism of the game's short length and gameplay mechanics. Its plot was loosely adapted into the 2012 film Silent Hill: Revelation 3D.

Silent Hill 3 is a survival-horror video game in which the player takes control of Heather, a teenager who awakens from a nightmare in a shopping mall and tries to return home to her father, while navigating environments that oscillate between reality and the Otherworld, a bloodier, supernatural version of it. Gameplay in Silent Hill 3 resembles closely that of its two predecessors, with gameplay set in the third-person view and divided among elements of combat, exploration, and puzzle-solving. The difficulty of both the combat and puzzle elements of the game can be set separately. In the case of the puzzle difficulties, there is a considerable difference between the "medium" difficulty level and the "hard" difficulty level; one of the puzzles on the "medium" level requires only simple pattern recognition, while the "hard" difficulty level version of the same puzzle requires knowledge of Shakespearean plays to complete.

To aid in exploration, Heather obtains a flashlight and radio early on, the later of which crackles when monsters are in close proximity. She can find "health" restoratives, such as first aid kits and energy drinks; beef jerky, used to lure monsters away from her path; and a range of firearms and melee weapons to fend off the monsters with. She can also block and perform side-step maneuvers to avoid enemies. Heather will also update any relevant maps of the area with notes on locked doors, inaccessible areas, and potential clues to puzzles. While the floor plans of the various environments largely remains consistent between reality and the Otherworld, certain areas may be rendered inaccessible in the Otherworld, with barriers or bottomless gulfs appearing in the street, for example. The game also features unlockable weapons and costumes.

Silent Hill 3 takes place in the fictional universe of the Silent Hill series. It opens with Heather's (Heather Morris) nightmare of being trapped in a derelict amusement park and killed by the roller coaster. She awakens in a burger restaurant, but before she can leave the shopping mall and return home to her father, private detective Douglas Cartland (Richard Grosse) confronts her, claiming to have information about her birth. Heather evades him and discovers that the mall is mostly abandoned except for monsters. She then encounters Claudia (Donna Burke), a mysterious woman who hints that Heather will be instrumental in bringing about paradise on earth. Heather soon finds herself in the Otherworld version of the mall — monster-filled, bloodstained, and decaying — and eventually returns to the original shopping mall, where she finds Douglas again. He confesses that Claudia had hired him to find her, though denies prior knowledge of the Otherworld or of any greater agenda of Claudia's. Heather leaves the mall and resolves to take the subway home. When she returns to home to her apartment, she discovers her father murdered on Claudia's orders. Claudia informs her that his murder was out of revenge and to engender hatred in her. Before leaving, Claudia informs her that she will be waiting for her in Silent Hill.

Intent on killing Claudia, Heather resolves to go to Silent Hill and accepts Douglas's offer to drive her there. On the journey there, Heather learns from a journal left by her father, Harry Mason, that she was the baby left to him at the end of the first Silent Hill game. Because she is the reincarnation of Alessa, the girl originally intended to birth the cult's god, Claudia intends for her to bring forth the god. Arriving in the abandoned and fog-shrouded town, Heather sets out to find Leonard in a local hospital. Revealed to be Claudia's abusive father, he intends to dispose of Claudia as cult leader and attacks Heather after learning that she is not a member of the cult. Heather defeats him. She journeys to the local church via a local amusement park, purportedly at Douglas' request. When Heather arrives at the amusement park, she finds him wounded, having tried to stop Claudia. He considers killing Heather to stop the god from being born but decides against it. Heather reaches the church and learns that Claudia, who was Alessa's childhood friend, intends to bring about the god's birth to remake the world into a paradise. Heather confronts her and vomits out the fetal deity, nourished by her hatred, with the aid of a supernatural substance given to her by Harry before his death. Claudia promptly swallows the fetus to Heather's horror and dies after birthing it. Heather then defeats the newly born god.

Three endings appear in the game. The "Normal" ending, which is the only ending available on the first play-through of the game, sees Heather and Douglas survive, while in the "Possessed" ending, Heather kills Douglas. In the "Revenge" ending, which is a joke ending accessible by performing certain in-game actions, Heather reunites with Harry, and Harry orders UFOs to blow up Silent Hill. According to Silent Hill: Homecoming, the "Normal" ending is the canon one as one of Douglas' files can be found in the game.