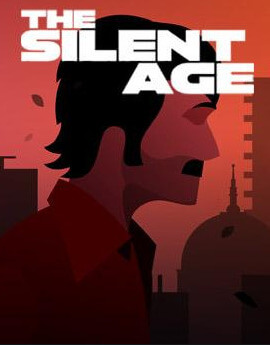 The Silent Age is a point and click adventure game developed by Danish indie game studio House on Fire. The story is set in 1972, and follows the protagonist Joe on a quest to save mankind by using time travel.

The player controls Joe, a janitor working for the fictional multi-million corporation known as Archon using a point and click interface. The main part of the game is set in 1972, but, during the majority of the game, Joe can use a portable time machine to move several years into the future, after an apocalyptic event which killed most people. Joe can move freely back and forth in time in most locations and the player can take advantage of this to solve some of the puzzles. E.g., a door which is locked in 1972 may be rusted away in the future, allowing access to a new location.

Joe is a janitor for Archon, a large American company. One day in 1972, he is told that his co-worker Frank has left for other opportunities, and thus is promoted to include Frank's cleaning duties in the building's basement laboratories. In the basement, he discovers a trail of blood that leads to one of the labs and finds an elderly man  wounded and dying. The man claims he came from forty years from the future to try to stop a virus that will wipe out humanity in the next few days, but cannot continue when he succumbed to his injuries. However, he manages to give Joe a pocket device that allows him to jump back and forth between the present and forty years into the future. Before Joe can use it, he is caught by security and taken to the police station.

While interrogated, Joe is given the time travel device by the officers and activates it, finding himself in the ruins of the barren city forty years in the future. Believing what the man said was true and figuring his best lead is to discover the identity of the elderly man, he uses the device to traverse the city and make his way to the hospital, where the man has been identified as Dr. Reginald Lambert, who lives on an island far from the city. Joe takes an ambulance and drives there, considering what he has already experienced.

Joe breaks into Dr. Lambert's house and eventually meets the younger Dr. Lambert, who initially takes him as a burglar and holds him at gunpoint, demanding an explanation. Once Joe explains how he comes by the time travel device, Mk II, Dr. Lambert recognizes it as an advanced version of his own prototypes, and explains what happened. Dr. Lambert had written a thesis which suggests the possibility of time travel, hence the company, then named Athena, hired him in attempts to develop time travel technology with the hopes of strangling communism in the past. However, the Law of Causality prevents them from traveling in the past before the invention of the time machine. Nevertheless, Athena secures a US military contract to instead use the time travel technology to travel into the future and bring back advanced weapons and technology to combat the Soviets; the company was renamed Archon at this point. Although the time machine Mk I was successful, many of their pilots never returned, and those that did had become deathly ill and went insane, raving about the barren cities, all traced to a deadly contagious virus that will be released at some point. Despite being offered incentives to stay and improve the technology, Dr. Lambert resigned and fled the city, preparing himself for the incoming disaster.

Dr. Lambert believes the way to avert the disaster is to have Joe travel the day before and destroy the computer that operates the Mk I, which will bring back the pilot along with the virus. Before Joe departs, Dr. Lambert cautions him that he may encounter his earlier version of himself and warns him to not make contact. Driving back to the city, Joe infiltrates into Archon with the aid of Mk II. While trying to find something in the nearby Cryo Labs to destroy the computer, he discovers Frank rifling through papers, who later disappears. Although Joe manages to destroy the machine, the Mk I has departed. Later, Joe discovers the elderly version of Dr. Lambert has arrived, having been accidentally shot by Joe earlier when he was infiltrating into Archon. Joe hides in the Cryo Labs to prevent encountering his earlier self, who finds Dr. Lambert and he is later taken away by security. He goes to see Dr. Lambert, who is actually barely still alive, having purposely diverted Joe's younger self's attention long enough to help program the Mk II to the same coordinates the Mk I went. Lambert attempts to tell Joe something important but eventually succumbs to his injuries.

Joe finds that he has travelled much further into the future, with the Mk II being destroyed on arrival. He finds the Mk I which has been deactivated. Exploring the ruins of Archon with the other pilots and the damaged Mk I machines, he finds a deathly ill Frank. Frank explains he was actually a Soviet spy, sent to infiltrate Archon which is believed to be developing some advanced technology, later discovered by Frank to be time travel. When he was discovered trying to access the papers so that he can bring them to the Kremlin as proof, he was dismissed by Archon. He decides to use the Mk I in an attempt bring it back to Moscow, but finds himself teleported into the far future and becomes deathly ill upon arrival. He gives Joe the generator needed to activate the Mk I to return to 1972, and assures him that they are, in fact, still genuine friends. Returning to 1972, Joe feels extremely ill, and immediately discovers that he is the one who brings back the deadly virus, activating the quarantine alert and security. With little time to spare, he manages to make it into a cryochamber to freeze himself, otherwise the security will come and arrest him, releasing the virus to them and to the outside world.

Joe wakes up in 2012 and meets a friendly doctor, Dr. Brown, who tells him that her group obtained the cryochambers after Archon went bankrupt in the 1970s. The doctor reveals they are able to remove the virus from Joe and other time pilots, which in fact is a rare avian flu discovered only in the 1990s. While the other pilots have gone insane from their ordeal and still believes the world is doomed, Joe is otherwise sane and offered the opportunity to return to the real world. The game ends with him discovering and trying on new technologies that have come about during his hibernation.