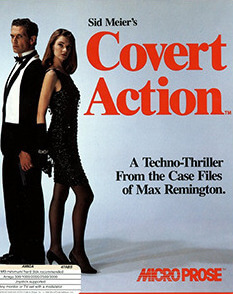 Sid Meier's Covert Action is an action and strategy video game released in 1990 by MicroProse for IBM PC compatibles and Amiga. The player takes the role of Maximillian Remington (or his female counterpart, Maxine), a skilled and deadly free agent hired by CIA, investigating on-going criminal and terrorist activities. Tommo purchased the rights to this game and digitally publishes it through its Retroism brand in 2015.

The gameplay is similar to the 1987 release Pirates!, by the same developer, Sid Meier, in that the gameplay is made up of several self-directed, distinct, and unique modes of play. The controls are relatively simple and uniform, and the sound and graphics, for the period, are widely considered at or above par.

During the course of a game, the player will be tasked with installing wiretaps, infiltrating enemy safehouses, intercepting and decoding secret messages and interrogating prisoners. The plots are uniformly without distinction, as is to be expected with randomly generated text-based plot elements. This allows for a less structured story to unfold, and enhances the game's replayability.

The game is broken down into missions, with players possibly receiving promotions after each successful mission. The primary goal of each mission is to uncover details about a criminal conspiracy involving multiple parties. Players must race against the clock to discover the identities of those involved and their roles in the plot before it's too late. For example, the case might begin with blueprints being stolen for a museum. The blueprints might then be delivered from this party to another thief, who might then use them to break into a museum to steal a painting, which might then be delivered to yet another party. If the player takes too much time to uncover the details of the plan, the plot will go down successfully and the criminals will escape.

Many of the pieces of data which the player needs are gathered through various mini-games. Successfully completing a mini-game often reveals one or more pieces of data, including the names and photos of those involved, as well as locations connected to the plot. The player is allowed to decide which skills his agent has mastered ahead of time, making the associated mini-games easier.

The longest mini-game involves attempting to directly infiltrate an enemy building. Before going in, players are allowed to select their equipment, including guns, various types of grenades, and body armor. Once inside, players search desks, safes, and cabinets for clues; these are photographed using a small camera. Players also frequently confront enemy agents, who must be avoided, slain or knocked unconscious. In some cases, if the timing is right, players can find and recover major pieces of evidence (such as a stolen item). If the character runs out of health, he or she is knocked unconscious and must either lose precious time escaping, or agree to a prisoner exchange by freeing captured enemy agents.

During the cryptography mini-game, players attempt to decode a scrambled message within a certain period of time. Players are frequently given certain known letters to begin with, but must then figure out the remaining letter mappings in a simple substitution cipher. Use of existing clues from the ongoing investigation is often key to solving these, e.g., searching for a word which could be "Washington" when it is known that the plot is taking place there.

The driving mini-game may involve either the player tailing a suspect to discover a new location, or the player fleeing from chase cars in order to avoid a confrontation. Cars are represented by small dots on maze-like streets. Players use a simple interface to control speed and direction

Electronics in the game involves the manipulation of circuit boards to either perform wiretapping or vehicle tracing. In the wiretapping mini-game, players attempt to either cut or to connect current flowing through a set of power lines to a number of phone icons, in order to listen in to conversations. At the same time, players must avoid disturbing the lines connected to alarms. The game is played by re-arranging the junctions through which power flows to produce the desired results.

Computer Gaming World praised Covert Action for including both action and "mind-twisting brainwork", and stated that "individual cases take at least half an hour to solve, but they are addictive". The magazine criticized the poor documentation, but concluded that the game "is entertaining in the extreme", comparing it to The Fool's Errand and Starflight.