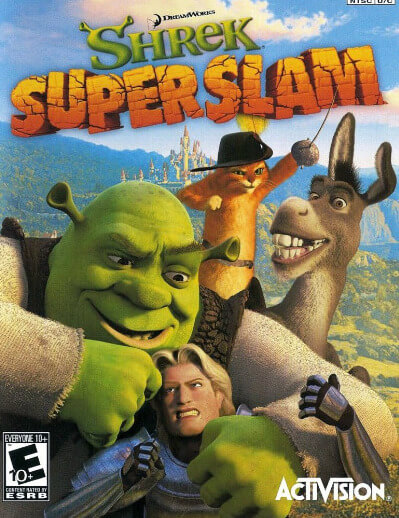 The main plot focuses on Shrek and his friends attempting to help Donkey put the Dronkeys to sleep in order to watch Survivor: Sherwood Forest together at the Dragon's Keep. When one of the Dronkeys inadvertently destroys the family's storybook, the group takes turns creating their own stories. After telling enough stories, the Dronkeys do fall asleep only to be woken up after Shrek yells at the game's announcer for talking too much in epilogue.

Shrek SuperSlam is a 3D-environment multiplayer fighting game in which two to four fighter characters battle in a variety of arena stages attempting to beat each other up and charge a special move called a "Slam" attack. When a "Slam" is successfully used on other fighters, the player gains points while continually (and creatively) destroying the arena in the process. Whoever gains the most "Slam" points will win when the round is over.

The game features three multiplayer modes: "Melee", "King of the Hill", and "Slammageddon".

In "Melee", the objective is to earn as many slam points within a two-minute time period. For attack, a word bank that says "Slam" will fill up. Once the bank has filled up, the player can unleash a Slam Attack which can hit multiple opponents. For each opponent who's hit, the player will receive a Slam Point, but if a player get slammed, they'll lose one. The player with the most slam points after the time limit stops wins.

In "King of the Hill", the object of the game is to stay atop of a hill the longest, while opponents try and knock each other off. The first player to reach 30 points wins. The longer the player stays on the hill, the more points she/he receive.

In "Slammageddon", each single attack counts as a Slam.

Every character "Slam" attack have different effects and range. For example, Shrek's "Green Storm" attack will send his opponents flying as he undergoes flatulence at close range, while Robin Hood's "Arrow Swarm" has him commanding his band of Merry Men to litter the battlefield in raining arrows from the sky. Other examples include Pinocchio's "Buzz Bomber" in which his nose grows and he flies across the arena at opponents or Fiona Ogre uses "Ogre Aria" to blast her enemies with floating projectile singing notes.