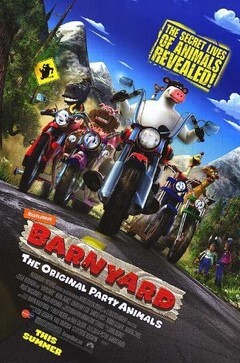 Barnyard is a party-oriented adventure game developed by Blue Tongue Entertainment and published by THQ; it is based on the movie of the same name. It was released on August 1, 2006 for Nintendo GameCube, PlayStation 2, Game Boy Advance and Windows. A Wii version was later released on November 19, 2006.

The game has various different accounts of gameplay from missions to a mini-game type system. You play the game through a sequence of 9 chapters as a cow of your choosing. An extra cow could be unlocked from having Nickelodeon games at the time that were included in the 'Crossover' event. As you progress through the chapters in the game, you will meet new characters, unlock new areas, get more in-game currency etc. You go around the Barnyard and either explore the area(s) the game has to offer or follow the story and complete the missions by going to the barn animal that sent you a text to your phone. You can find these characters by looking for, and following the quickest path to, the '!' on the map. As you continue through the chapters, the game will continue increasing in variety as well. There are a lot of in-game movie references as well including dialogue from the characters and certain in-game objects. As you get to the mid-part of the game, however, you lose the same character, Ben, that is lost in the movie. As you get to the end of the game, specifically Chapter 8, things only get worse as the leader of the Barnyard, Otis, runs off and you are put in charge. However, the tides suddenly turn as you, the other animals, and Otis take one finale stand against the final boss. Note that depending on the chapter you're in, there will be either more or less missions than the previous chapter(s).

Within the game there is a storyline which fits the movie to some extent but still goes along its own path. Characters die and are introduced as the game progresses as in the movie. Missions fit the storyline of the game and the movie and vary a lot. A lot of missions once completed become minigames which you can play again. Missions can be started by simply talking to the characters once you locate them. Most of the in-game missions are done during the day and must be done by the time the timer runs out, but some of them are nighttime missions that need to be completed by morning (Or before the timer runs out).

Mini-Games most often become available once completing missions (as stated above) but may also become available in the barn. The missions vary in many ways from Golf to Jumping and Kicking a pipe at one another to stay alive. Throughout the game, you may notice that the difficulty of some of the mini-games will increase as the story progresses. There will also be variations of mini-games from previous chapters. One example being 'Tease The Mailman' and 'Tease Mrs.Beady'.You can also buy some of the mini-games from the Gopher Underground Shop as some of them are located in the Night Barn. As you get into the game, you will be told about the 'Barnyard Champion' Title throughout. At the end of all the mini-games you will notice that you get graded on your performance (Final Score). The Grades Range from an 'F' to a Star. Getting Stars is the key to getting Barnyard Champion. You need to talk to a character mentioned in the game that will give you info on the standings for Barnyard Champion. As you keep climbing to the top of the leaderboard, you receive a Gold Rush Token for every time you move up. Once you get to #1, a special text is received, indicating that you are now the Barnyard Champion. After you get this text, a special cutscene will play once you enter the Night Barn for the first time after receiving the text.

During the day, the barn is a boring place where you can acquire some resources for cooking but, at night, the barn becomes a lively place where you can party, make mocktails and play minigames. The barn is very customisable through the Gopher Underground Shop, a shop mentioned in an early Chapter 1 mission that is located just outside the main area. When you get to this point in the game, you will receive just the right amount of Gopher Bucks for the only item available for your first visit. After this mission, all the other objects become unlocked except for the Neon Dance Floor and you eventually start buying stuff there more often and begin doing missions for the head person (owner) for the Gopher Underground Shop.