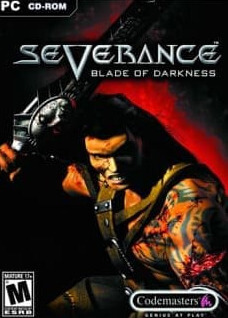 Severance: Blade of Darkness is an action-adventure game developed by Rebel Act Studios and published by Codemasters. The game was released in North America and Europe for Microsoft Windows in February 2001, receiving generally favorable reception.

The individual levels of the game bear a resemblance to diverse environments from the Middle East, Europe, Africa and South America under fictitious names or names with slightly changed spelling.

The Lord created Chaos and divided it into two parts, the Light and the Darkness. He gave to them life and thought, and so were born the Spirit of Light and the Prince of Darkness. But the Prince held the unspoken desire of supplanting his Father. He learned the secret language of Creation and tried to create a new being. But the newborn would not accept the commands of the Prince of Darkness, and growing stronger, took part of his own essence and created terrible monsters and demons. The Lord and the Prince of Light tried to stop it, and they waged a great war. Gradually, the being was weakened and finally defeated, but after this, the Father was exhausted and withdrew into the depths of the Universe.

The younger gods, proud of the victory, completed the creations of their father, giving shape to the Sun, the Moon and the Earth. However, the Prince of Darkness attempted to corrupt the souls of the fledgling race of man, amidst the confusion of a new war incited by dark creatures of his own creation. The Earth was in a moment of extreme danger, so one of the younger daughters, Ianna, cast a powerful spell that expelled the gods from their dwelling place and kept the Earth closed to them. The Spirit of the Light went to the Sun and from there protected the Earth during the day. Ianna went to the Moon, to protect it during the night. Thus began the cycle of Day and Night, and a new age of balance was born over the Earth. But all of the gods' creations remained, leaving mankind to contend alone against the diabolical fiends.

The struggle continued for many years until a young hero emerged to defy the Darkness. He was chosen by Ianna to wield the Sacred Sword and fought the Evil in its own lair. The Darkness was defeated, but the hero was mortally wounded, and his friends buried him with his Sword in the Temple of Ianna. After that, they hid four magical gems, which unlock his tomb, where the sword is kept.

But all that was long ago. Now, something strange is happening. The signals are clear. Foul creatures are awakening from their dormancy and spreading terror and destruction. The Darkness has returned, and the end is near. A new hero is needed, a chosen one who will wield the Sword, and destroy the Enemy forever.

This "evil blade" in the game title is in fact, the "Sword of Light" when it is possessed by the forces of darkness (as shown in the intro video). It is liberated and becomes the Sword of Light when the hero comes and imbues it with the six magical runes.

Severance has an immediately recognizable fantasy premise with swords, sorcery and the like. It features four playable characters: Tukaram, a barbarian; Naglfar, a dwarf; Sargon, a knight; and Zoe, an amazon. Each character starts on a different map, has different preferences and selection of weapons, and has different strengths and weaknesses in terms of power, agility, and defence and, most importantly, different sets of combos or moves.

The four characters start their adventure at different locations but eventually go along the same route. The ultimate goal of the game is to obtain Ianna's Sword, kill the evil necromancer Dal Gurak and then descend into the Abyss for the final confrontation with the Chaos Child. This final skirmish is only accessible to players who have collected all of the runes from the previous levels which collectively empower Ianna's sword with the goddess' blessing. To achieve the magical sword the players have to make sure they have collected six well-hidden magical runic tablets before entering Dal Gurak's tower. The six runes speak about the time of creation (similar to ancient Zoroastrian myths). In addition to the runes, murals and memorials also shed some light on the events preceding the main storyline. The short cutscenes between levels also provide brief insights into the plot.

As the player progresses through the game, experience points are earned, which enables them to increase in level and gain new special attacks and abilities which are executed via combinations of buttons and direction keys, much like a beat-em-up game. Some of these special attacks are weapon-specific and can deal huge amounts of damage or hit multiple foes at one time. The game features a relatively advanced dismemberment system. Once severed, body parts from enemies can be picked up and used as weapons.

The game was shipped with a level editor, which enabled fans to create custom levels and modifications to the game.