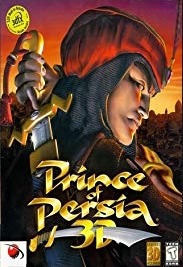 Prince of Persia 3D is an action-adventure video game, developed and published by Red Orb Entertainment for Microsoft Windows, is the third game in the Prince of Persia series. The game debuted in 1999, 10 years after the original, and incorporated 3D graphics in its gameplay.

In 2000, a Sega Dreamcast version under the name Prince of Persia: Arabian Nights was developed by Avalanche Software and published by Mattel Interactive, which had previously purchased both Red Orb Entertainment and The Learning Company. Many of the control flaws from the original PC version were corrected and other notable bugs were fixed, improving the gameplay of this port, although it still suffers the same camera problems. This version was only released in North America.

It was released by Red Orb, which was hived off from Brøderbund. However, due to financial difficulties, Red Orb was forced to release the game before it had gone through the bug detection and correction stage. Moreover, it was sold and re-sold first to Mattel, then to The Learning Company.