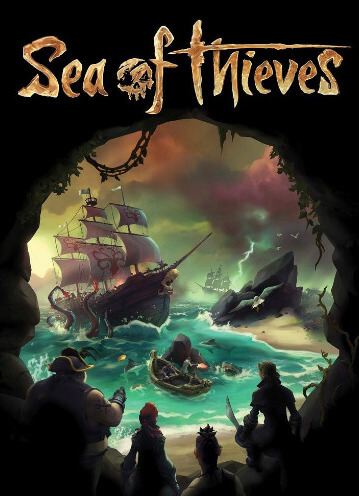 Sea of Thieves is an action-adventure game developed by Rare and published by Microsoft Studios for Windows and Xbox One, released on 20 March 2018. The game allows players to take the role of a pirate sailing the seas of a fantastical world either solo or as part of a crew of up to four players, with gameplay presented from a first-person perspective. The game features both co-operative and player versus player combat, and includes cross-platform play between Xbox One and Windows.

Upon release, Sea of Thieves received mixed responses from critics. Critics praised the game's gameplay and style, with particular focus on the game's sailing mechanics. However, the majority of critics found the game to be lacking in content at launch, and criticized the full-price tag. Additional criticism was directed towards repetitive quest design and performance issues.

Sea of Thieves is a pirate-themed action-adventure cooperative multiplayer game played from a first-person perspective. The game features cross-platform play between Windows-based personal computers and Xbox One video game consoles. A group of players travel and explore an open world via a pirate ship and assume different roles such as steering, hoisting sails, navigation, and firing cannons. Players embark on quests, collect loot and engage in combat with other players. Sea of Thieves is a shared game world, which means groups of players will encounter each other regularly throughout their adventures. The game has a cartoonish art style and an exaggerated physics engine that allow players to perform stunts, like being shot out of ship cannons.

Players can collect coins by completing missions called voyages, taking loot from other ships, or raiding a skeleton fort that contains large amounts of gold. The player aims to become a pirate legend. The gold can be used for purchasing everything from re-skinned weapons to new hulls and sails for the ship. These items are cosmetic and do not affect combat. The weapons are given to the player at the start of the game, and have five rounds of ammo before needing to find an ammo box to restock. The four usable weapons are a flintlock pistol, a blunderbuss, a sniper rifle, and a cutlass. Two weapons can be carried at once.

Sea of Thieves was developed by Rare. Its pirate themes can be traced back to Rare's Project Dream, another pirate-themed video game in the 1990s that eventually became Banjo-Kazooie. However, pirate themes in Rare's projects have existed as far back as the original Donkey Kong Country in 1994.

Sea of Thieves was developed using Epic Games' Unreal Engine 4. Development started in 2014 with the idea of "Group Shaped Narrative", which game director Gregg Mayles described as "a clumsily titled concept that envisaged a different type of multiplayer game where players would create 'experiences that are entertaining to watch'". The game, code-named "Athena", did not originally focus on pirates at the time. Instead of a regular character creator, the game features an "infinite pirate generator", that randomly generates a carousel of eight pirates with various body types and faces; players can pick one to play, look at eight more, or can lock one appearance in place while the others change. In November 2016, Rare launched the Insider Programme to give select members access to an in-development version of the game. Rare used the Insider Programme for testing purposes and to get feedback from players.

In June 2015, Rare announced Sea of Thieves at Microsoft's Xbox press conference at the Electronic Entertainment Expo 2015 (E3) alongside a compilation of thirty previous games, Rare Replay. Gameplay was first shown at E3 2016. The game was scheduled to launch on Windows and Xbox One in 2017, but it was delayed until 20 March 2018. The game is part of Microsoft's Xbox Play Anywhere cross-buy program, meaning that purchasers of the downloadable version of the game can play the game on both a Windows 10 computer and an Xbox One. Additionally, the game is playable at launch for those subscribed to Xbox Game Pass.

An "Anniversary Update" was released in April 2019, adding a large amount of new content to the game, including a story component and a standalone player versus player mode. In September 2019, the game added a microtransaction store allowing players to purchase virtual coins that can be used to buy in-game cosmetics.

Sea of Thieves received "mixed or average" reviews from critics, according to review aggregator Metacritic. Many noted that the game was lacking in content, and criticised Rare's decision to charge full-price.

Writing for Polygon, Russ Frushtick gave the game 6.5/10, saying "Sea of Thieves has the foundation of an incredible experience. It is a true pirate game that simulates the experience of piracy perfectly. And yet, after those first few jaw-dropping hours, you’re going to start feeling less like Blackbeard and more like Blackbeard’s accountant." Similarly, Kirk McKeand of VG24/7 wrote that the game "just needs more. It needs more ways to play, more mission variety, more enemy variants than just different coloured skeletons, and more meaningful progression. If these things don’t appear soon, I can see player numbers dropping off substantially after a short while." Michael Goroff of Electronic Gaming Monthly gave the game a 6/10, writing "Sea of Thieves' world isn't completely lacking in achievement, thanks to its luscious visuals and excellent sailing mechanics, but it feels completely undercooked in terms of actual gameplay. Perhaps ironically, Sea of Thieves feels like the skeleton of a game rather than a fully realized experience." IGN's Brandin Tyrell gave the game 7/10, writing that it had "a good foundation that's fun with friends" but was bogged down by a repetitive grind.

Upon release, a large number of players reported having trouble logging into the game. Rare studio head Craig Duncan and executive producer Joe Neate explained that due to a higher-than-expected number of players getting the game on day one, they had to turn some away in order to stop servers from crashing.

Monaco: What's Yours Is Mine
hit
upd
new