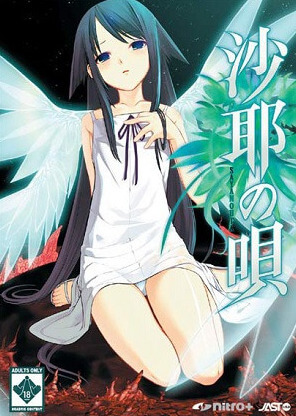 A three-issue comic book based on Saya no Uta, called Song of Saya, has been produced by IDW Publishing. The issues were released from February though April 2010.

A feature film adaptation is currently being developed by Sav! The World Productions.

Fuminori Sakisaka is a young medical student whose life changes when he is involved in a car accident along with his parents, killing them and wounding him. He wakes from an exaggerated form of agnosia that causes him to see the world as covered in gore and people as hideous monsters. As he contemplates suicide in the hospital, he meets Saya, who he sees as a beautiful young girl, but is in reality a horrific monster from another dimension whose appearance drives people mad. Due to their circumstances, the two become close and move in together, becoming lovers and incredibly dependent on one another.

Fuminori's cold attitude toward his friends (whom he also sees as hideous monsters) worries them. After Yoh, who has a crush on Fuminori, attempts to confess her feelings, her friend Omi goes to confront Fuminori—and promptly becomes food for Saya. It is with this incident that Fuminori unknowingly tastes human flesh, finding it delicious due to his warped senses. As Koji investigates Fuminori's strange actions, Saya visits Fuminori's neighbor, Yosuke, and changes his brain into the same as Fuminori's as an experiment. Yosuke, driven insane, kills his family and assaults Saya before being killed by Fuminori.

From here, Saya offers to change Fuminori's brain to before the accident. If Fuminori accepts, his agnosia disappears, but Saya leaves him, as she wishes for him not to see her true form. Fuminori is arrested and confined in a mental hospital. Saya leaves to look for her missing "father", Professor Ogai, while Fuminori swears to wait forever for her return.

If Fuminori declines Saya's offer, he will learn that he has killed his neighbor and has been eating human flesh. Fuminori decides to take care of the suspicious Koji, driving him to Ogai's mountain cabin and attempting to kill him by pushing him into a well. Saya assaults Yoh before mutating her into the same being as Saya as part of a plan to give Fuminori a "family". This act puts Yoh through hours of torturous pain, and she is reduced to a sex slave for Fuminori's and Saya's desires.

Fuminori's psychiatrist, Doctor Ryoko Tanbo, saves Koji from the well, aware of Saya and already investigating Ogai. The two discover a secret chamber in the well and find Ogai's corpse as well as his research of Saya and her species. Koji returns home and discovers Omi's and the Suzumi family's flesh in his refrigerator. From here, Koji can either call Ryoko or Fuminori. If Koji calls Fuminori, the two confront each other at an abandoned sanctuary. Koji attempts to kill Fuminori but instead finds Yoh, who begs for him to kill her and end her pain. Koji, driven insane by her monstrous appearance, shoots her and beats her to death with a steel pipe before engaging in battle with Fuminori. He overpowers Fuminori but is killed by Saya before he can deliver the fatal blow. Saya then collapses and reveals that she is pregnant. She releases her spores as her "last gift" to Fuminori, who looks on in joy as the spores target humanity, changing all of them into the same beings as Saya. Ryoko, hiding in Ogai's mountain cabin, finishes transcribing his research and learns all she can about Saya and her race before resigning herself to her fate of mutation.

If Koji calls Ryoko, the two confront Fuminori. During the fight, Koji still kills Yoh, but before he can be killed by Saya, Ryoko throws liquid nitrogen on her, freezing her. Despite being mortally wounded by Fuminori, Ryoko manages to shoot Saya and shatter the ice. Fuminori then commits suicide, with Saya dying alongside him. Koji is left as the only survivor of the story, unable to live as he did before now that he knows the "truth" of the world; he is haunted by nightmares and the thought that more beings like Saya exist. He purchases a single bullet for his revolver in the hopes that, when he is unable to carry on anymore, he can commit suicide and find salvation in death.

Richard Eisenbeis of Kotaku observed the game as being "known as one of the most messed-up games ever released", but praises how the game makes the player sympathize with the villains—"But perhaps the most fascinating thing about The Song of Saya is that somehow, in the middle of all the horrors it presents, it manages to make the abominable, beautiful."

Gen Urobuchi noted that the popularity of his later work Puella Magi Madoka Magica rekindled interest in Saya no Uta in 2011, so much so that Saya no Uta "made at least as much money as if it's a new game".