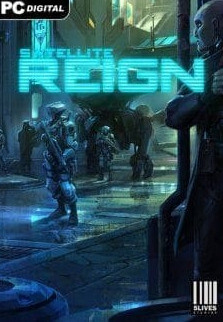 Satellite Reign is a cyberpunk real-time tactics video game that was released in August 2015 for Microsoft Windows, macOS, and Linux platforms. The game was developed by Brisbane based 5 Lives Studios and is a spiritual successor to the Syndicate series, which co-founder and programmer Mike Diskett had worked on.

After the release of the Syndicate reboot in 2012, the Syndicate Wars producer and lead programmer, Mike Diskett, expressed his displeasure over the game stating that it was "nothing like the original." This encouraged him to create a spiritual successor to the game he made back in 1996. Unlike the reboot which was a First-person shooter, both Diskett and the team at 5 Lives Studios tried to build upon the gameplay experience found in the original games with its fixed camera system and character class.

The game was released on August 28, 2015. A post-launch update introducing four-player cooperative gameplay was released in July 2016.

Satellite Reign takes place in an unnamed fictional city referred as "The City". A corporation named Dracogenics rises after releasing a prototype for immortality named Resurrection-Tech. Dracogenics turns to corporate crime and bribes politicians with immortality in exchange for control and influence. This eventually leads to the privatisation of The City's services and full corporate control over The City's police force. Civil unrest arises and is suppressed by Dracogenics, but a rival corporation soon comes to light and launches anti-Dracogenics attacks. The player controls this rival corporation and must overthrow Dracogenics from The City.

Satellite Reign has a score of 75 out of 100 on Metacritic indicating "generally favorable reviews".