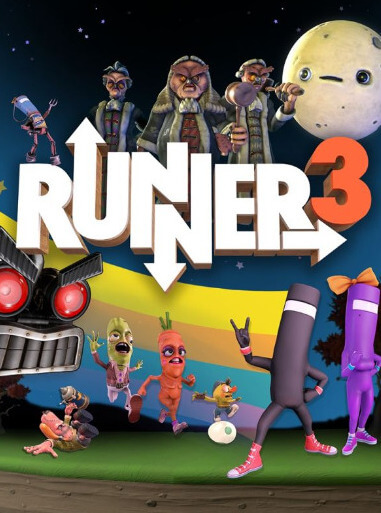 Runner3 is a rhythm platformer video game developed by Choice Provisions. A sequel to Bit.Trip Presents... Runner2: Future Legend of Rhythm Alien, Runner3 is part of the Bit.Trip series, starring the character CommanderVideo. The game was released on May 22, 2018 on Windows, macOS, and Nintendo Switch, and was released on the PlayStation 4 on November 13, 2018.

Runner3 is a rhythm platformer video game in which players take control of CommanderVideo, protagonist of the Bit.Trip series.

CommanderVideo runs forward automatically and the player controls actions such as jumping, sliding, and kicking to overcome obstacles and collect things. Everything that comes his way will hit in rhythm to the background music, so keeping the beat is crucial to getting through the game.

There are goods scattered across every level. The most common are gold bars. There is a set amount of gold in each level, and collecting them increases the score. Second, the Mode-Ups. A mechanic across all Bit.Trip games is the Mode system; the higher the mode, the higher the scoring and the better the music. Although Moding-Up varies in Bit.Trip games, in the Runner series, the player needs to jump into a Mode-Up to immediately go up a Mode. There are five modes in the Runner games, in ascending order: Hyper, Mega, Super, Ultra, and Extra. The player starts at Hyper and works their way up. One notable difference is that in previous Runner games, the Mode-Up appeared as a red 3D plus; in Runner3, it is a blue boombox. Third, the Gems. Gems are on a path of their own, an alternate and harder path. Gems can be collected only once, and they are used to unlock cosmetic items.

New mechanics such as riding vehicles and the ability to double jump have been introduced in this installment. While previous Runner games featured different routes through a level by jumping on vertical platforms, Runner3 has stages with alternate paths that branch off into the background. The game also features side-quests, called Hero Quests, in which CommanderVideo stops to interact with non-playable characters that, for example, might task him with collecting specific items in certain levels. Completing Hero Quests unlocks new playable characters. In addition to past characters from the Bit.Trip series, the game includes the Shovel Knight character from the game of the same name, Eddie Riggs from Brütal Legend, and the Narrator, a caricature of voice actor Charles Martinet.

There are only 27 main levels, and three main worlds (Foodland, Spookyland, and Machineland), but each level has branching paths, secrets, and more variety in music and scenery.

Throughout the Runner series, retro challenges have been implemented for more hardcore players. In BIT.TRIP RUNNER and Runner2, the retro challenges are smaller levels based on older video games, and run on the same mechanics as the main game, but with only gold bars to collect.

Runner3 has a different sort of retro challenge. The player has full control over CommanderVideo's movement, making it play as a more traditional platformer. There is a retro challenge for every core level. Each retro level has five "Gildan Coins", which can be traded in for other cosmetics.

Runner3 was developed by video game development studio Choice Provisions. One focal point of Runner3's design was creating a rewarding and enjoyable experience for playing on any difficulty. Choice Provisions' co-founder Alex Neuse emphasized that many games rewarded only hardcore players and offered a lesser experience for playing on lower difficulties. Voice actor Charles Martinet reprised his narration role in Runner3 and had a playable appearance.

Following the release, CommanderVideo had announced upgrades to the game, which will include such features as enemy density, more checkpoints, stair assist, bonk counter and gold bars and gems.

The video game aggregator site Metacritic gave the Nintendo Switch version a 73/100 while the PC version got 78/100.

Kevin Tucker of Shacknews, who reviewed the Steam version of the game, gave it 9 out of 10.

Seth Macy of IGN had criticized the game outdated graphics and repetitiveness of levels.