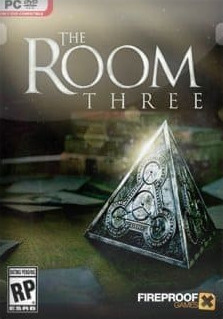 The Room Three, as its predecessors, is an escape the room game, where by solving puzzle boxes and other similar puzzles, the player reveals new secrets and puzzles towards reaching the game's conclusion. The game is presented in a first-person, three-dimensional view, allowing the player to look around rooms from a spot, or rotate their view around a puzzle box or similar object. Elements of objects can be interacted with, such as pushing buttons, inserting and turning keys, or sliding sections around. Items can be collected and examined from the player's inventory, which many include manipulation of that object to reveal secret chambers or the like. As with previous games, The Room Three also has some puzzles made out of the classical element Null, which can bend reality. The player-character has a special eyepiece that they can wear to see through the Null, revealing hidden clues or puzzle parts. The Room Three introduces an additional lens for this eyepiece that allows the player-character to manipulate objects within small spaces like keyholes.

The Room Three is structured around a central hub area and with four main areas that are accessed through this. There are optional puzzles scattered in the central hub that can be solved as to reach one of the game's alternate endings.

Continuing after the events of The Room Two, the player-character has escaped the home of "A.S." before it was consumed by the entity from the Null, and is now on a train ride home. A strange box appears in their passenger compartment as the train passes through a tunnel, inside which is revealed a pyramid with strange etchings. When the train passes through the next tunnel, the player-character is mysteriously transported to Grey Holm, an island estate some ways off the English coastline in the English Channel. A series of notes inform the character that they were brought here by "The Craftsman", who also claims the credit of creating puzzles that were in the previous games, and is impressed with the character's ability to resist the Null. He wants to release the Null with help of the player characters, and instructs them to collect four additional Null Shards, the same as the pyramid they collected on the train, which will help them gain the Craftman's Key and open an exit from Grey Holm.

The game has four different endings. Should the player only end up collecting the Craftman's Key, they direct their character towards the Grey Holm tower, opening an exit back to the train with the key. However, once aboard the train, they find a new note from The Craftsman that reveals that it was a ruse, and that their soul will be trapped forever. The camera pulls back to reveal the train to be running on rails within an infinite maze within a globe in Grey Holm (The "Imprisoned" ending).

If the player solves additional puzzles in Grey Holm, a mechanical clairvoyant called Mystical Maggie aids the player by revealing that The Craftsman intends to use the player's soul as a sacrifice to the Null element; additional notes reveal Maggie had been human once and had also been lured by the Craftman to Grey Holm. Interacting with Maggie provides additional clues to more devices like the Craftman's Key. Depending on how the player uses these devices alongside the Craftman's Key at the tower puzzle, the player-character can either escape Grey Holm and watch it destroyed by the Null entity ("Escape"), escape Grey Holm and watch the Null entity be released to the world ("Release"), or get teleported to the giant temples on the planet they remotely explored earlier in the game ("Lost").

The Room Three gained critical acclaim, with Metacritic giving a Metascore of 90 out of 100 based on 14 critics, and a reviewer from Hardcore Gamer giving a score of 4 out of 5.

The game received a score of 9.0/10 by IGN, 5/5 by TouchArcade, and 8/10 by Game Informer. It was entitled with the Pocket Gamer Gold Award. Later it won iOS Game of the Year in Pocket Gamer Awards 2016. The game was enlisted among 60 Best Educational Apps by Tutora. It emerged as finalist under Best 3D Visuals and Best Mobile Game categories of Unity Awards 2016. The game was nominated for a BAFTA award.

Fireproof Games released a sequel titled The Room: Old Sins. It was released on iOS on 15 January 2018 and on Android on 19 April 2018.