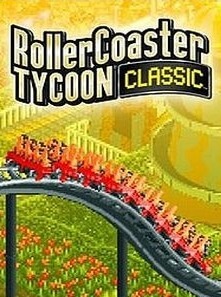 Classic implements the same gameplay as the first two games in the RollerCoaster Tycoon series. Played from an isometric view, players are tasked with building or revitalizing an amusement park by adding rides, attractions, facilities, paths, landscaping, and staff to manage the park. In particular, the game allows players to plan out a wide array of custom roller coasters and other rides using tracks, such as log flumes and go-karts. The player also must manage the park's finances to make sure they bring in sufficient revenues from guests to cover the cost of running the park and installing new features.

Chris Sawyer had developed the original RollerCoaster Tycoon and its sequel RollerCoaster Tycoon 2, which released respectively in 1999 and 2002. The games had come out of his work developing a sequel to Transport Tycoon, which he released in 1994. Sawyer allowed Frontier Developments to develop RollerCoaster Tycoon 3 while he worked on Locomotion, a 2004 spiritual successor to Transport Tycoon. Following this release, Sawyer had appeared to disappear from the games industry; according to Sawyer in a 2016 interview, he took this absence in part over the legal difficulties he had over securing unpaid royalties from Atari, whom had acquired the rights to publish the RollerCoaster Tycoon series through Infogrames' purchase of Hasbro Interactive. He also stated that he was disappointed with the state of video games during this period which focused too much on violence.

Sawyer re-emerged in 2010 with the opening of 31X Ltd. a holding company for his Transport Tycoon intellectual property. However, he saw there was interest in a mobile version of this game, and took 31X in a direction towards mobile development. In 2013, he announced the mobile version of Transport Tycoon, developed with Origin8. With Origin8's help, Sawyer was able to convert the original Transport Tycoon code from a form that relied heavily on assembly code to transfer it into a more portable form. The title was released in late 2013. He considered the mobile release of Transport Tycoon a success, and that Origin8 was willing to continue to help port RollerCoaster Tycoon into a similar mobile format. Sawyer also recognized that there was a demand for a game that used the more simple controls and graphics offered in the original Tycoon games, which worked well for mobile and touch-screen devices.

In March 2016, Sawyer affirmed he had started work on RollerCoaster Tycoon Classic with Origin8, to be released for mobile devices. As with the rework of Transport Tycoon, this required Sawyer and Origin8 to rework the assembly code from RollerCoaster Tycoon 2 into C. They were also able to add new elements to the game during this period.

The game was released for both Android and iOS devices on December 22, 2016. On that same day, Sawyer released a statement explaining his reason for developing the game: "It was my long term ambition to bring the classic game to modern touch screen devices as its visual style and tactile nature are so well suited to smartphones and tablets." Meanwhile, the CEO of Atari stated that the game should appeal to both long-time fans, as well as new players.

A Microsoft Windows and macOS port of the game was released on September 28, 2017.

Bob Fekete of iDigitalTimes praised the game for faithfully porting the original games on mobile devices for a low price tag, but criticized the game's "cramped" feel and occasionally low framerates.