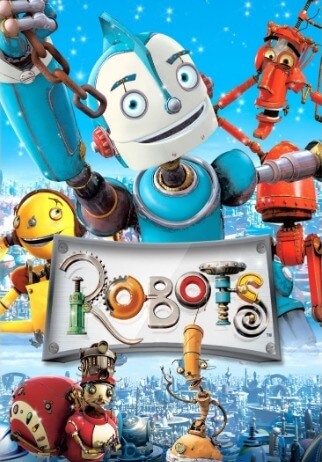 Robots is a platform video game released in 2005 by Eurocom to coincide with the film of the same name.

A robot named Rodney Copperbottom decides to leave his home at Rivet Town and head to Robot City to realize his dream of working for his childhood hero, Bigweld. He makes a flying robot called Wonderbot out of scrap before he leaves. At the city, he goes to Bigweld's factory, but realizes that Bigweld is mysteriously absent, and finds out that the factory is currently being run by a robot by the name of Phineas T. Ratchet, who hatches an evil plan to create more futuristic robots like himself and destroying old robots made out of scrap. Rodney also meets a gang of colorful outmodes called the Rusties, who are also affected from the change Ratchet has made. A robot named Jack Hammer tells Rodney that there are many scrap parts in the sewers of Robot City and that Rodney can go collect the scrap in order to keep the Rusties alive. After doing so, Rodney and the Rusties go to Bigweld's Mansion to find Bigweld. Bigweld agrees to help Rodney and the Rusties, and sets off with Rodney to stop Ratchet and save all robot-kind.

This game features Rodney Copperbottom as the playable main character. The player can also play as the Wonderbot in certain areas, and Bigweld in the chase scene.

Rodney can invent different devices by collecting a certain amount of blueprints scattered throughout the environment. In the beginning of the game, he repairs his Wonderbot, his personal companion. He also obtains the Scrap Launcher from Herb Copperbottom, a weapon which uses Scrap as ammo which is found in the worlds of the game, and a wrench which is used as a melee weapon. More weapons are acquired throughout the course of the game. Scrap is also used to purchase items at vendors, including the Maxi-Scrap 500 and Maxi-Scrap 1000 which upgrades his Scrap capacity from 200 to 500 and 1000 respectively, the Refine-O-Max which doubles the value of Scrap, and four mutually exclusive upgrades to his Scrap Launcher which can be replaced at any time. Later while in Robot City he obtains the Magnabeam from Jack Hammer, which uses energy which must be refilled by going on recharge circles, and can also be used as a weapon.

The game received generally mixed reviews, with a score of 53 on Metacritic for the PlayStation 2.