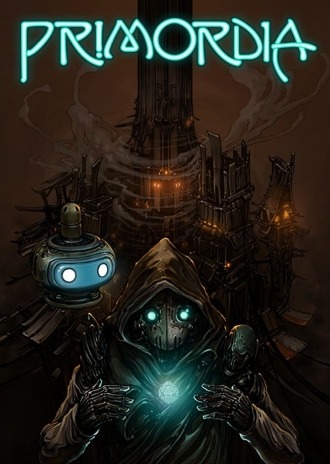 Primordia is a point-and-click adventure game developed by Wormwood Studios and published in 2012 by Wadjet Eye Games. In 2016, Primordia was released on iOS devices.

In a post-apocalyptic world, android Horatio Nullbit (Logan Cunningham) and his floating robot companion Crispin (Abe Goldfarb) inhabit and attempt to rebuild U.N.N.I.I.C, a derelict airship stranded in a vast desert.  One night, a heavy, floating, square-like robot invades the airship, incapacitates Horatio with its laser and steals the airship's power core.  Crispin suggests they head to the legendary city of Metropol, a "city of glass and eternal light", for a new core, but Horatio remains adamant in either reclaiming the stolen core or finding a new one in the wasteland, totally preferring to stay away from Metropol for his pre-programmed hatred of the city, that he can't discern why.

Navigating the wasteland close to U.N.N.I.I.C, Horatio and Crispin come across and reactivate a buried, giant war machine named Goliath, who tells Horatio his true name is Horus, claiming it was an ancient enemy of his, and thus won't surrender its power core.  They also come across and pass through the tests of faith of sentry drone Ever-Faithful Leobuilt, who tests Horatio's knowledge of the 'Gospel of Man' (A twisted robotic interpretation of the Holy Bible), allowing him to grab a bomb the drone revered as a shrine.  Horatio and Crispin attempt to use the bomb's energy core to power U.N.N.I.I.C back up, but it proves fruitless.

Attempting to chase the stealing robot, Horatio and Crispin are ultimately led to Metropol, that is revealed as a dilapidated metropolis filled with robots governed in an iron hand by MetroMind, the city's AI previously in charge of subways and transit.  Horatio, at entry, is stripped of a megacycle (CPU power cycle) and the 'Gospel of Man', deemed a subversive literature that is tossed into the city's underground, the Underworks.  Meeting some of Metropol's citizenry, Horatio learns the stealing robot is MetroMind's right hand S.C.R.A.P.E.R (Subway Construction, Repair and Precision Excavation Robot), and the power core is in her possession in MetroTower, a giant power station.

Horatio attempts to reclaim the power core legally by reopening Metropol's courtroom with the aid of Clarity Arbiterbuilt, the aid to Metropol's Arbiter (the city's judicial AI), but Horatio discovers the Arbiter itself had its memory banks wiped.  S.C.R.A.P.E.R also tries capturing Horatio and Crispin, but Horatio collapses the courtroom entrance atop S.C.R.A.P.E.R, after recovering memories from the carcass of Charity, Clarity's sister.  The memories reveal evidence that MetroMind used Charity to be rid of Arbiter – under the pretense of "preventing civil war" – and take over Metropol through a silent coup.  Witnessing this, Clarity determines MetroMind has lost all legal protection and joins Horace and Crispin's quest for the power core. She informs Horatio that, in order to confront MetroMind, they must acquire fragments of the access code to MetroTower, which was exclusive to the ruling AIs.