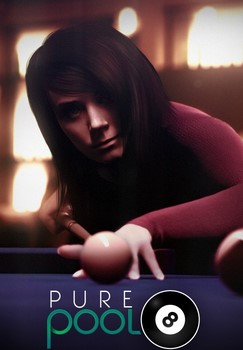 Pure Pool is a pool video game by British developer VooFoo Studios in association with Ripstone Games for the PlayStation 4 and PC platforms. It was released on the PlayStation Store in North America on 29 July 201 and Europe on 30 July 2014. Microsoft Windows release by Steam and launched worldwide on 30 July 2014. VooFoo signed up for ID@Xbox self-publishing initiative and released the game on the Xbox One on 14 November 2014.

The game features standard cue sports game types in addition to a game-specific mode called Accumulator. In career mode the game offers 40 hours of gameplay. The Official Sound Track (OST) of the game was composed by Etch Music, produced, recorded and mixed by Trevor Gibson at Circle (Recording) Studios in England, mastered by Zac at Zikis Mastering, was released by Supersaurus Records  and is published by Integrity Publishing.

Pure Pool was developed by VooFoo Studios in association with Ripstone Games. The teams collaborated on Pure Chess. The game builds on the teams previous title Hustle Kings, most noteworthy being the ball physics and the graphics.