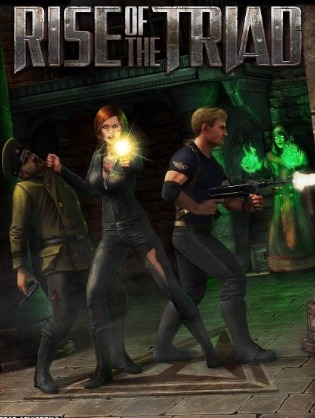 Download Rise of the Triad Free for PC Torrent

Rise of the Triad: Dark War is a first-person shooter video game, developed and published by Apogee Software (3D Realms) in 1995. The player can choose one of five different characters to play as, each bearing unique attributes such as height, speed, and endurance. Its remake was designed by Interceptor Entertainment and released by Apogee Games in 2013.

Like most early first-person shooter games, the single-player mode's objective is to collect keys in order to proceed through the levels. Occasionally, special tactics and simple problem-solving skills are required to reach locations. Although most levels are fairly linear, there are some maps which have multiple exits.

Certain enemies can beg for their life if they take enough damage, or fake their death. Some enemies dodge the player's attacks, while others lie in the ground to ambush the player. Other enemies can shoot nets to restrain the player, or steal and use weapons from the player. There are also four bosses. All enemies are digitized actors, mostly played by Apogee employees and their friends and family.

On random occasions, there are an especially large amount of gibs produced when an enemy is killed, presenting the player with a "Ludicrous Gibs!" message. The amount of gibs can be controlled through the options menu, which allows the player to set the graphics to various levels of goriness, from completely bloodless to extreme.

Only one power-up can be active at once, and power-up effects last for a limited time.

Jump pads catapult a player in the air. By stepping onto one, the player character is propelled straight up, while by running up to it the player character can make long jumps. Jump pads are often required for getting past certain obstacles or reaching a ledge to retrieve a key. They can also be used for collecting powerups and bonuses.

Destructible objects such as ornaments or plants may block secret doors. If light poles and firepots are shot, the area dims. Glass can be shattered by shooting or running through it.

Bonuses are awarded for various achievements whenever a level is completed. Examples are picking up all the missile weapons in a level, using all the healing items, or ending a level with minimal hit points remaining.

The multiplayer mode (called COMM-BAT in the game) allows up to eleven players simultaneously. Each can have separate uniform colors, but in team mode, teams are defined by uniform color.

There are nine multiplayer modes. These include a standard deathmatch mode, and the similar "Score More", which assigns different points depending on the weapon and way that a kill was done. Other modes consist of collecting or destroying as many triad symbols as possible. There are a few "tag" multiplayer modes, similar to the children's game, where a player must tag another player or moving symbols. There is also a "Hunter" mode, in which a "prey" player with no weapons has to be hunted by the rest, and a capture the flag mode. Options that can be set for a multiplayer game include player attributes, and whether or not health refills, missile weapons, or traps are spawned.

A team of special operatives, known as the HUNT (High-risk United Nations Task-force) is sent to San Nicolas Island to investigate deadly cult activity taking place in an ancient monastery. Their boat, the only way back, is destroyed by patrols, and the team soon learns that the cult plans to systematically destroy nearby Los Angeles. The operatives, now unable to return whence they came, are then left to fight their way into the monastery on the island, and eventually put a stop to the cult's activities.

During its early stages of development, Rise of the Triad was initially meant to serve as the sequel to Wolfenstein 3D, titled Wolfenstein 3D II: Rise of the Triad. The presence of the Walther PP pistol, the MP 40 submachine gun, the Bazooka, and the outfits worn by the enemies allude to Nazi Germany and imply the original aforementioned intent for the development of ROTT.

Rise of the Triad System Requirements

(0) Comments on "Rise of the Triad Full Version"