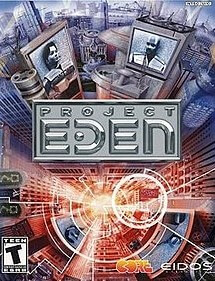 Project Eden is a 2001 action-adventure video game developed by Core Design and published by Eidos Interactive. It was released for Microsoft Windows and PlayStation 2. The planned Dreamcast version was cancelled. The plot involves a squad of four law enforcement agents investigating the disappearances of people by working their way downwards through layers of a towering mega-city. Project Eden's gameplay emphasises puzzle-solving, requiring the player or players to control each of the four characters and use their individual abilities to make progress. A single player can control any one of the characters, and jump between them at will or up to four players can play simultaneously as different members of the team.

The game starts with Urban Protection Agency agents Carter, Andre, Minoko and Amber heading below city limits to find two technicians missing from the Real Meat Company (a corporation that ironically produces synthetic meat). The suspicions of the team revolve around a local and dangerous gang named The Death Heads. The UPA team tracks the gang down to their base in St. Lucia's Church; but on their way, the gang members and many animals also start mutating into strange creatures. Clearing their way through the Church, battling the mutants, the UPA Team finally get close to the technicians, only to see them being taken far below city limits, possibly to ground zero (the term used for the ground level of the earth itself). The UPA Control instructs the UPA Team to recover a creature, a live one, for analysis; which shows that it has been a regular dog which had been tampered with using an old Gene splicer (this hints at the fact that genetic technology has advanced greatly). The analysis also reveals that the creatures they have been attacked by are being controlled by a signal; which is their next job, to both find and if possible, recover the technicians, and locate the source of the signal.

On their way the UPA Team encounter little girls who are blonde, wear a red dress and call themselves Lucy. After some talk they mutate into dangerous beasts. Minoko, while going to another sector of the city by a high-speed railcar, mentions that she once had a sister named Lucy, but that Lucy had died due to a genetic illness she and their mother suffered from. As they continue, the team starts to question if Minoko's family was involved in their situation. The train crashes before reaching its destination, and leaves Minoko trapped in by a group of cannibals. Upon their arrival, Carter asks Control to check out Minoko's father, Dr. Joseph Molenski, who was once a skilled technician and a biological engineer, and who was sacked from Real Meat for stealing machinery for his own research. As a fugitive, Molenski was never acquired by UPA, nor was Lucy. Minoko was taken to the UPA Recreation Program, and thus became a UPA Agent.

After traversing a former zoo that is now inhabited by cannibals and mutants, the team arrive at Ground Zero, the nominal ground level of the city. The team continues to levels below sea level. During their investigation, they stumble upon a video of Dr. Molenski, saying that he has found a nuclear bunker underneath, and has also rigged up a basic gene splicer. He also mentions that using it, he hopes to cure Lucy.

The UPA Team enter the Eden Bunker, and upon their entrance, they discover that Dr. Molenski was trapped in a time dilation field, a field that which stops time around a given area, or slows it down immensely; similar to the effect of the team's Timeshock weapon. Molenski appears to be reaching out towards a computer. After deactivating the time dilation field, Minoko is kidnapped. Lucy tells Minoko that she has been creating the creatures, and the girls that mutated (in attempt to find a new body for herself) were her failures due to the different DNA of those girl victims that were too much to deal with. Since Minoko is her biological sister, Lucy wishes to take her body.