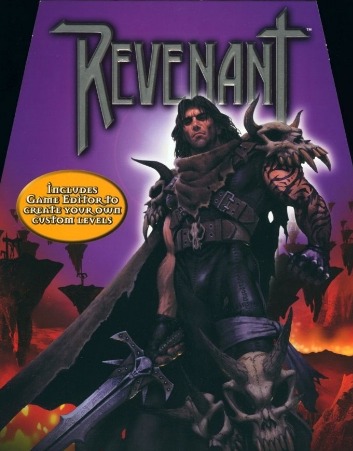 Revenant is an action role-playing video game by Cinematix Studios, released in 1999 by the publisher Eidos Interactive.

The main character of the story is Locke D'Averam, a revenant named after the house of Averam, which raised him from the dead. His real name is never revealed in the game. Immediately after being brought back from Anserak (Hell), Locke is sent on a quest by his new master, Sardok, who is the advisor to Lord Tendrick, ruler of the island. The quest is to locate and rescue the Tendricks' long-missing daughter, Andria, who was kidnapped by a mysterious cult calling themselves The Children of the Change. The entire game takes place on the island of Ahkuilon, which is home to the town of Misthaven, where Tendrick rules.

As the player progresses through the story, it is revealed that Locke was once the king of an ancient empire centered on Ahkuilon. This warrior-king made a pact with a demon god, but he found the price of his wife's soul too much to bear and could not go through with her sacrifice. For this reason he was condemned by the demon god to an eternity of suffering in Anserak and his mighty empire was destroyed and pulled into the earth.

The cult that the newly resurrected Locke finds himself facing is in fact led by the avatar of the same demon god he betrayed ages ago. As he explores Ahkuilon in pursuit of the missing Andria, Locke finds himself facing enemies both new and ancient. Many characters in the game hint that there is a "darkness" surrounding Locke and some even seem to know of his past. As the story builds to a climax it becomes clear that not all is as it seems and that history may yet repeat itself.

Revenant's combat system functions slightly differently depending on the control method used. Locke can be controlled with the mouse to perform standard attacks with minimal player input. In addition, the player can use the keyboard for finer control, gaining access to three different basic attack types as well as the ability chain them into special combos, some of which result in special death animations. These specialized kill moves are enemy-specific, and range from crushing spiders with a stomp to beheading hostile swordsmen. A gamepad or joystick can also be used in a similar way to the keyboard method, with nearly every move or command able to be mapped to buttons or button combinations. In addition to permanent upgrades to his attributes, like strength and agility, Locke gains extra fighting abilities after a level threshold has been reached (every 3 levels, including levels 1 and 3 and up to level 24). It is also possible to combine certain movements into a fluid cycle of attacks. A martial arts master in town provides Locke with the necessary training when he achieves a sufficient level.

In addition to melee combat, there are also a number of talismans which can be combined to cast magic spells. Certain combinations can be found in scrolls starting with basic spells and progressing to more complicated ones. Spells vary from freezing to poisoning, and certain spells lock opponents in place, allowing Locke to combine a magical attack with a special combat move.

Bows cannot be found in the single-player game, but are available in multiplayer, giving players the ability to engage in ranged combat.

In the United States, Revenant sold 37,000 copies by March 2000. Commenting on these figures, GameSpot's writer Desslock noted that the game "sold quite poorly". The game received generally positive reviews from critics.

Jim Preston reviewed the PC version of the game for Next Generation, rating it three stars out of five, and stated that "Diablo fans who need a quick fix will enjoy it, but it doesn't do much to transcend its genre."