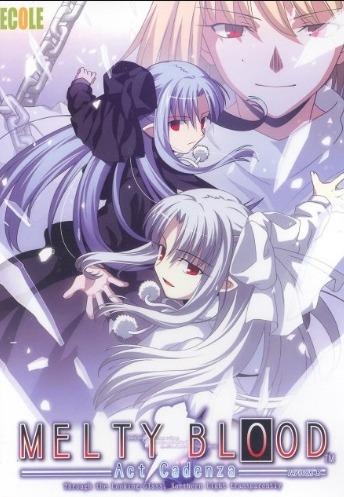 Melty Blood: Act Cadenza was the first arcade port of the series and was published by Ecole Software. The visual novel was removed, while the Arcade Mode dialogue featured in Re-ACT returns. It completely revamped Aoko Aozaki's movelist for use as a playable character, and introduced Kouma Kishima into the series, a man who was deeply involved in Shiki Tohno's past. It also introduced the Shielding mechanic (separate from EX-Shielding), as well as including various changes to the properties of characters. This version (as well as the later released Ver. A) can be identified by the Atlasia crest, and the phrase "Through the Looking-Glass, Black Light transparently", both present in the logo.

Melty Blood: Act Cadenza, released for the PlayStation 2, was unique as a port in that it included an option to revert to Version A mechanics, yet introduced significant changes that were later included in Ver. B, including an early version of Neco-Arc Chaos as a hidden character. It is sometimes known as "Ver. A2".

Melty Blood: Act Cadenza Ver. B is an arcade port of the PS2 game with various changes and upgrades, the most notable of which is the inclusion of White Len as a playable character, with a significantly weakened moveset. It also introduced a fifth button that served as a contextual action depending on the situation and the direction held on the joystick when pressed, such as dodging or throwing. This version can be identified by a dual silhouette of Len and White Len in the logo and the phrase "Through the Looking-Glass, Northern Light transparently".

Melty Blood: Act Cadenza Ver. B2 is a Windows port of the arcade Ver. B. It has added features including tag-team mode, a 4-player team battle mode, a programmable dummy for training purposes and a new hidden boss character, Neco-Arc Chaos Black G666(replacing G-Akiha from Melty Blood: Re-ACT). It also included subtle gameplay changes, most notably altered defense ratings for characters and adjustments to the game's input system. It was released on July 27, 2007.