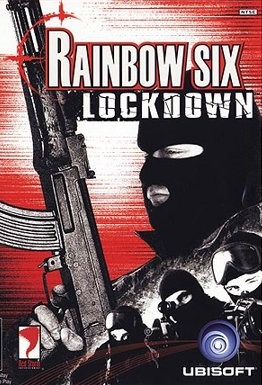 The player controls the main character, Rainbow leader Ding Chavez, and leads a single squad in real-time through each level. The player can issue orders to team members, such as to break down a door or toss a grenade into a room. Missions are broken up into linear levels, instead of each mission taking place on a single non-linear map. Lockdown also gives players the ability to save their in-game progress at any time during a level, in contrast to previous games' lack of an in-game save feature.

The console versions of Lockdown features several "shooting gallery"-style sniper missions, in which players take control of sniper Dieter Weber, and snipe terrorists from a position such as a small room or a helicopter while covering the entry of an AI-controlled squad into an area. The console versions also feature cut scenes that flesh out the personality and background of each Rainbow member, as well as collectible suitcases hidden throughout each level that can be collected for bonus material.

The PC version of Lockdown removed the sniper segments and storyline-related cut scenes, and also included redesigned levels to match the less linear gameplay of previous entries in the series. Several other longstanding elements of the series that were removed from the console versions were added back into the PC version, including helmets on the character models. Lockdown is the first game in the series to remove the planning phase.

Lockdown takes place in 2009 and revolves around an elite counter-terrorist unit called Rainbow. In Lockdown, Rainbow is pitted against a worldwide terrorist organization known as the Global Liberation Front, composed of various leftist, anarchist, and Third World organizations opposed to the West. The Global Liberation Front has stolen a man-made nanotech virus named "Legion". "Legion" is a nanite aerosol that causes massive hemorrhaging in its victim and has a mortality rate of 100%. Rainbow must find and stop the GLF from using the virus. To accomplish this, Rainbow goes from country to country, tracking down each country's GLF cell, and finally capturing or killing that cell's leader, ultimately leading to a showdown with the GLF's supreme leader, Bastian Vanderwaal. A major plot twist occurs when team sniper, Dieter Weber, is captured by the terrorists, prompting an unauthorized rescue effort by the team. The game includes 16 single-player missions in all (14 on the Xbox).