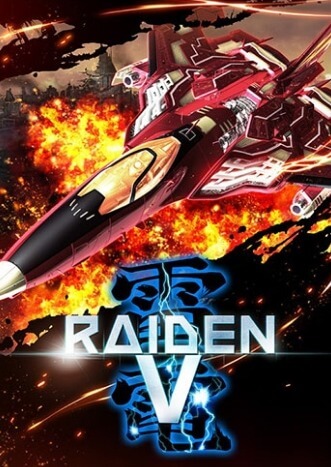 
Raiden V is a shoot 'em up video game in the Raiden series developed by MOSS. It was released in Japan for the Xbox One in February 25, 2016, with a director's cut version being released worldwide for PlayStation 4 and Microsoft Windows in 2017. A Nintendo Switch version was released on July 25, 2019, making it the first Raiden game to be made available on a Nintendo console since Raiden Trad.

Gameplay in Raiden V is similar to its prior installments but the plot incorporates real-life locations, with the player craft fighting enemies in New York, the Middle East, France, England, Belgium, and Sweden.

Like the Raiden Fighters series and Raiden IV: Overkill, players have a choice of three aircraft: The Azuma from Japan (the aircraft from the early games), Spirit of Dragon from United States and Moulin Rouge from France. They all have different grades of power, defense, mobility and a sub-weapon of fixed power. Unlike Raiden IV and Raiden Fighters Jet, all aircraft have the same bomb.

Another change with Raiden V is the introduction of a shield/energy bar, allowing the player to take a number of hits before being destroyed. However, only one ship is provided, thus on destruction, the player will lose their score and be asked to continue.

'Flash Point' returns since its introduction in Raiden III. There are five levels of Flash Point gauge, with the chain score challenging players to make it to the online leaderboard. Killing enemies rapidly will fill the gauge more efficiently thus improving the score multiplier.

Raiden V also introduces the Cheer System where online players can cheer each other to unlock the skill Cheer Call. In tight situations, using Cheer Call will cancel all enemy bullets at once and allow players to greatly boost sub-weapons for a short time until the Cheer Call gauge is depleted. Boosted sub-weapons cause heavy damage and instant attack speed. The Cheer Call gauge can increase slowly by progressive play and rapidly every time the player presses "Cheer" to other players who get any achievement, such as destroying a certain number of enemies or defeating a boss without taking damage. Players that receive many cheer counts will increase the cheer call gauge faster.

The story of Raiden V follows the previous games. Raiden V is the first game in the series to have a detailed story. Named characters engage in fully voiced dialogue, along with narration during the story screens. The story fleshes out several narrative elements that had gone unexplained in previous games, such as the origin of the Fighting Thunder project and the Crystals' motives. Depending on the stage route taken by the player, the story changes slightly while not affecting gameplay, as the characters become more aware of each other's true motives the higher the rank of a given stage is.

The game's story takes place 17 years after humanity's war with the Crystals began. The Vanquish Crystal Defense, or VCD, awaits an attack order to launch Fighting Thunder to assist the North American army, who have been decimated by attacks by the Crystals. Aboard the VCD flagship, the Bellwether, commanding officer Richard "Max" Maxwell (voiced by Xander Mobus in English) and communications officer Eshiria Portman (Rina Hoshino) lament that the VCD and the Fighting Thunders are being held back during what they consider a Crystal contamination far bigger than in the past.

After receiving the long-awaited attack order, Fighting Thunder assists the North American army, defeating a battleship that was taken over by the Crystals. Max and Eshiria receive word from VCD's Middle East branch that there is major Crystal activity in the region. Eshiria notes that the energy signatures are the same as what they detected in North America. They then discover a cave full of Crystals. Max has a shipment of the Crystals from the cave sent to a French shipping port en route to the Large Hadron Collider, under the suspicion that the Crystals may have signs of intelligence. With this suspicion, Max orders an SOS call to the French shipping port, even under the doubts of his superior, international peace councilor Helga Lindenbaum (Laura Post). Max's suspicions were proven right, with the Crystals attacking the port. After fending off the port attack, Max realized that the Crystals can upgrade any machinery they contaminate.

Max orders a mission to the Large Hadron Collider facility, expecting a massive Crystal presence there. His suspicions are again proven right, as the Crystals have laid siege to the facility in an orderly military fashion. Max hypothesized that the Crystals have a command structure. After clearing out the Crystal contamination at the Large Hadron Collider facility, a surveillance drone detected on the Bellwether's deck steals the Crystals and delivers them to a pirate mercenary, Valbarossa Hawkeye (Sarah Anne Williams), who plans to transport them to an unknown facility.