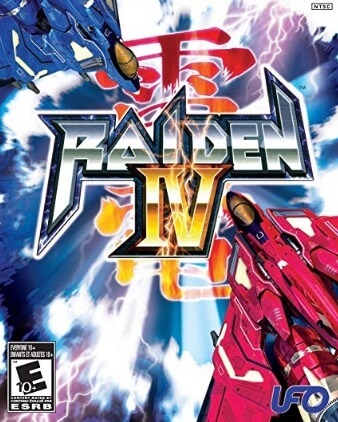 Raiden IV (雷電IV Raiden Fō) is a 2007 vertical scrolling shooting video game developed by MOSS. It was first released in the arcades in Japan. A home conversion was produced for the Xbox 360 in 2008. A later version was released for Taito's NESiCAxLive digital distribution platform. An updated version of the game, Raiden IV: OverKill, was released for the PlayStation 3 and Microsoft Windows.

The gameplay of Raiden IV is identical to the previous games. In each stage of increasing difficulty, players maneuver their fighter craft, engaging various enemies and avoiding their attacks. The Flash Shot mechanic, first introduced in Raiden III, returns in this game. Collectible items include weapon upgrade icons, bombs to cancel enemy attacks and deal damage to enemies over a large area, and score items such as medals and fairies.

The Crystals have returned again after numerous defeats against humanity. The VCD immediately launches a new model of the Raiden fighter, the Fighting Thunder ME-02 Kai, to stop the Crystals from taking over the Earth.

Raiden IV has received below average review scores upon its U.S. release, with both IGN and the Official Xbox Magazine scoring it a 6 out of 10. IGN's Eric Brudvig writes: "Though at first glance you might think there are 14 levels in Raiden IV ... there are in fact only seven with the second half of the game merely repeating the first.... UFO Interactive Games went ahead and added insult to injury with its use of downloadable content. After dishing out $40 for the game, you'll find that only one of the three ships on the main menu can be used. The other two must be purchased through Xbox Live." Backlash over the pay to play ships has created controversy at several gaming forums, leading gamers to wonder whether the extra content is worth the price to obtain them.