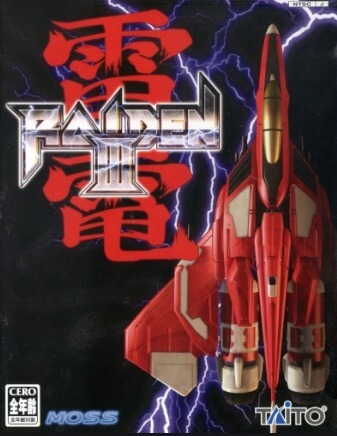 Raiden III (雷電III Raiden Surī) is a 2005 scrolling shooter video game developed by MOSS, licensed by Seibu Kaihatsu, and published in Japan by Taito. It is the fourth game in the Raiden series. Raiden III uses the Taito Type X arcade hardware, giving full 3D graphics to the series for the first time. The game was published in the US by UFO Interactive Games, in Europe by 505 Games, and in China by Soft-World International Corporation.

Raiden III shares the same mechanics as the previous games in the series, while introducing new mechanics to set it apart from its predecessors. Players are given a new primary weapon, the piercing Proton Laser, and a new missile weapon, the Radar Missile. New mechanics introduced in this game include the Flash Shot multiplier, which increases score the faster an appearing enemy is destroyed, and Double Play, which allows one player to control both ships with one controller. Raiden III is the first game in the series to give the player craft smaller hitboxes. The bombs were changed to deploy instantly and cover the entire screen, as opposed to the earlier games' delayed explosion and smaller area of damage.

The game consists of seven stages of increasing difficulty, with the first three levels taking place on Earth and the last four taking place in space.