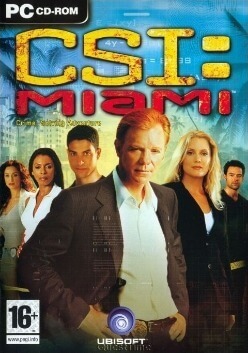 CSI: Miami is a video game based on the CSI: Miami television series. The game was developed by 369 Interactive, published by Ubisoft, and was released for the Microsoft Windows on April 24, 2004. In 2008, Gameloft redeveloped the game for iOS.

This game, like CSI: Crime Scene Investigation, follows a distinct pattern of five cases, with the fifth case tying together the previous four.

An arm has been found on the Palm Glen golf course next to the corpse of an alligator. In this case you work with Calleigh Duquesne.

The owner of a nightclub is found dead in the middle of the dance floor. In this case you work with Tim Speedle.

A woman is found dead in a mysterious boat with strangulation marks and a gunshot wound to the head. In this case you work with Eric Delko.

A man is found dead sitting in a chair on the beach outside of his house, next to him the corpse of his pet dog. There are no visual signs of murder but the death of two beings at once is too much of a coincidence to rule out murder. In this case you work with Yelina Salas.

Judge Lawford is found dead in his study with a gunshot wound to the head. Suspects from all other cases are included in this one, and as such this is the case which ties all the other cases together. In this case you work with Horatio Caine, but when interviewing suspects, you work with each of the other CSI's, depending upon which suspect you interview.

The game was met with mixed reception, as GameRankings gave the PC version a score of 57.89%, while Metacritic gave it 54 out of 100.