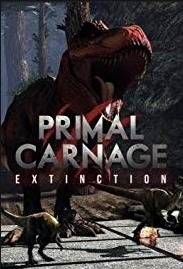 Primal Carnage: Extinction is a class-based, online multiplayer video game featuring human versus dinosaur combat. It was released April 3, 2015 on PC via Steam. A PlayStation 4 version was released on October 20, 2015. The game was created by indie development team Circle 5 Studios, in collaboration with Pub Games and Panic Button, it is a loose sequel / remake of the original 2012 PC title Primal Carnage, featuring similar first-person shooter human gameplay and third person dinosaur gameplay.

Set on an abandoned island where dinosaurs have been brought back to life, the player can assume the role of the mercenary team sent to eliminate the prehistoric creatures, or take control of the dinosaurs and wipe out the humans. Players can customize their characters using numerous skins, some of which will be unlockable through achieving trophies on PS4, with PC users receiving cosmetics randomly through loot drops as part of an economy system. These in turn can be traded or sold on the Steam Marketplace.

Upon its official PC launch in April 2015, Primal Carnage: Extinction was heavily criticized for technical problems that were still present after months of Early Access. On TechRaptor, Georgina Young said that, "the concept is awesome," but, "bugs and glitches are rampant," calling the game "virtually unplayable" on MacBook Pro (the game does not officially support Mac) and giving it a 2.5 rating out of 10. Writing for Blast Magazine, Grant Bickelhaupt called it, "a thoroughly good time," however, the balancing was criticized, with the human gameplay described as "punishing." The review gave Extinction 2.8 stars out of 5, with poor ratings in the story and lasting appeal categories.

In a later review for GameGrin, Ryan Davies wrote, "A simple, but fun, FPS that could have been so much better. The dinosaurs are certainly fun, but it won't take long for you to grow tired of the game at large," giving it a score of 6/10. HookedGamers awarded the game a Fun Score of 6.8, praising the dinosaur sound design, saying that it "gives the game an added boost." When describing the game as a whole, the reviewer docked points for clipping issues and having few game modes, noting that, "it does lack that little bit of polish that would make it a great game," but summing up with, "Primal Carnage: Extinction is still worth your time, especially if you love dinosaurs." CanadianOnlineGamers praised the game's dinosaur animations, sound design and music, scoring the game a 70/100 and called Extinction, "A fun dino romp for fans of these giant (and not-so-giant) lizards. It doesn’t really bring anything else new to the table in the team deathmatch genre, but what it does bring, it does it well."