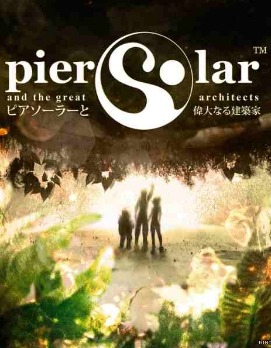 Pier Solar and the Great Architects is a homebrew role-playing video game developed and published by WaterMelon for the Sega Genesis. The game was released worldwide on December 20, 2010. The game optionally utilizes the Sega CD expansion device to enhance its audio capabilities.

The story is focused around three best friends — Hoston, Alina and Edessot. Hoston's father falls ill and the three friends are left to seek a rare magic herb to cure him. This story later develops into a much larger plot surrounding Pier Solar and the Great Architects.

Hoston is a young botanist, taught by his father. He is a carefree laid-back young man. When his father becomes dangerously ill, Hoston realises that he is the only person who can save him and heads for the forbidden caverns of Reja where he hopes to find the herbs that will save his father's life.

Alina was adopted at a young age. She grew up with Hoston and Edessot as her only friends and is desperately trying to get her father to approve of her. Even though she is superficially strong and responsible, she turns out to be lonely at heart, because she feels that Hoston and Edessot are the only people who truly care about her. She is protective of them and in many ways considers them to be her real family, though neither Hoston nor Edessot understand this.

Edessot is a mechanics genius and mature beyond his years. He is part of a wealthy and liberally-minded family, and has been free to explore the world to his heart's content. Usually happier alone and tinkering with machines, he still likes spending time with Hoston and Alina, having formed a particularly strong bond with the latter.

Development of the game began on June 8, 2004 as a small project by the community of the website Eidolon's Inn, a community dedicated to homebrew-development for Sega video game consoles. The project was originally intended to be a simple RPG based on the members of the community, and the target platform was the Sega CD. At that time the project was simply called Tavern RPG, a reference to the website's message boards being called "The Tavern".

As development progressed the original idea was abandoned in favor of a full-fledged fantasy RPG of greater scale. By 2006 the game engine had become sophisticated enough that the creation of actual content could really begin. While most of the Eidolon's Inn community was no longer directly involved, other people joined the team, leading to a core of eight members with additional help from many more.

Goals for the game became ever more ambitious, with the development being switched from the Mega-CD, for which CD-ROMs would have been inexpensive to produce, to the Sega Genesis, a system using more expensive cartridge-based storage media. To allow for the transition without having to reduce the amount of game content, it was decided to use a cartridge with 64 megabits of memory, making it technically the "Biggest" game cartridge for the system, while finding a way to utilize the superior sound hardware of the Mega-CD at the same time if the device was present.

The game was announced in a developer's blog with the launch of a website shortly after revealing the game's final title in January 2008. A demo was released later the same year to play on emulators, with pre-orders starting at the same time. A release at Christmas 2008 was announced. The game got considerable media attention for a homebrew title during the following months, with the UK magazine Retro Gamer featuring a two-page article in issue 49 and numerous websites reporting on it.

However this release date was not met, the developers citing the departure of a team member who had contributed essential graphics to the game, and his wish not to have his work used in the final version as the main reason. The delay was announced on November 14, 2008, but no new release date was given. Still media attention remained steady, with Germany's longest running print video game magazine M! Games and UK magazine Games TM reporting.

Reviews of Pier Solar and the Great Architects were mixed. While its presentation was widely praised, reception to the gameplay was average. Bradly Halestorm of Hardcore Gamer praised the game's use of a "vibrant color palette" and its "strong art direction", calling the game "one hell of a roleplaying experience". Derek Heemsbergen of RPGFan said that the game's graphics, music and atmosphere were "fantastic", but felt that the actual gameplay was too frustrating, noting what he perceived as a "labyrinthine" design in many areas. He also called parts of the game's combat "tedious and repetitive", citing "lengthy" animations and "high difficulty" as reasons. Mike Moehnke of RPGamer concluded that the game was "unlikely to appeal to many people weaned on more recent generations of RPGs", adding that "those with a more retro mindset will find some enjoyment".

The game's soundtrack received widespread acclaim. Derek Heemsbergen of RPGFan called it "catchy" and noted that it helped "augment the game's atmosphere". Joe Juba of Game Informer said that the soundtrack helped in achieving an "authentic 16-bit" look, calling it "absolutely fantastic". Bradly Halestorm of Hardcore Gamer called it "a triumph" and added that it managed to "convey strong emotions" with "beautifully arranged" compositions.

(0) Comments on "Pier Solar and the Great Architects Full Version"