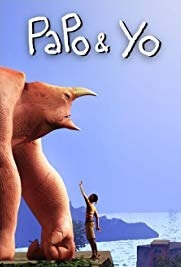 Papo & Yo is a fantasy adventure video game, released on August 14, 2012 on the PlayStation 3 via the PlayStation Network and since April 18, 2013 on Microsoft Windows through Steam. It was released on January 7, 2014 on OS X and Linux through the Humble Indie Bundle X. The game involves a young Brazilian boy Quico who, while hiding from his abusive, alcoholic father, finds himself taken to a dream-like favela, and meeting a normally docile creature, Monster. The player, as Quico, can interact with Monster and manipulate the buildings of the favela in unique ways, such as by stacking individual shacks on each other, to complete puzzles and progress in the game. Papo & Yo was designed by Vander Caballero, who created the story based on his own past in dealing with an abusive, alcoholic father.

The game takes place in an unspecified Brazilian favela which the player has to navigate. The player takes on the role of Quico, a young boy who has run away from his home to escape his abusive and alcoholic father. Quico has the ability to turn the environment into a magical and dream-like world. For example, tugging a glowing thread can pull a stairway out of the side of a building, lifting a cardboard box can cause an entire building to come unmoored from its foundations, shacks can sprout legs and scuttle into place to provide a handy bridge. According to Ars Technica's website "there's a sense of childlike imagination at play in the way the game adds a layer of magic into the rundown world, and it's likely to make you look at your own surroundings a little differently after you play".

One of the key elements of the game is Monster, a giant that Quico discovers while navigating through the slums. Monster at first appears to be very kind and helpful. He can be made to hold down pressure plates and his belly can be used as a super-trampoline to reach rooftops. Monster has an addiction for eating frogs and if he eats one he becomes a fiery, raging beast that will damage anything around him, even Quico if he cannot get away quickly enough. The player can use a fruit to calm him.

Quico is a young Brazilian boy that has been abused by his alcoholic father. While hiding in his closet during one of his father's drunken rages, clutching his favorite toy, a robot doll named Lula, Quico discovers a strange chalk mark on the wall, and touching it, finds himself taken to a dream-like world. There, a young girl named Alejandra initially sees Quico as a threat, but comes to be a guide. Lula also becomes animated and helps guide Quico through the world.

Quico eventually comes upon a giant lumbering creature, simply known as Monster. Alejandra and Lula warn Quico about the dangers of Monster, but Quico finds the creature docile and playful. However, when Monster eats a frog, it becomes enraged, chasing after Quico until he can calm it with a rotten fruit. They proceed through the dream world, but during one episode when Monster is enraged, it damages Lula. Alejandra directs Quico to a temple where they can use the anger from Monster to revive Lula, but this requires luring the creature into giant traps meant to hurt it. Quico completes this task, and Lula is successfully revived, but the three are now chased by Monster. Alejandra is eventually caught and eaten by Monster, but not before she directs Quico to go to the Shaman to help cure the Monster.

During these scenes, there are brief periods where Quico awakes in a dream and witnesses a past memory: that of his father accidentally running over a person with his car in a dark rainstorm. One such scene shows his father's shadow as that of Monster.

Quico guides Monster to a sky-tram like device but Lula is forced to stay behind to operate it. The tram ends at the Shaman, but Quico finds there is no Shaman, only the memories of his father, and showing that he had fallen into his alcoholic and abusive state after the accident; Monster represents Quico's imagination of his father, while the frogs are a substitute for his father's alcoholism. A voice warns him that Monster cannot be cured and Quico must let him go. After calming Monster to sleep, Quico reluctantly pushes Monster into an abyss, and then follows a path that returns him back to his closet in the real world.

Announced on 3 June 2011, at the Electronic Entertainment Expo (E3), the game marked the debut release for Montreal-based studio Minority. Development of Papo & Yo was supported by Sony's Pub Fund scheme, which provides financial support to small-scale developers.

Developer Minority announced a soundtrack release (composed by Brian D’Oliveira) on PSN in a blog post, with a scheduled release date of December 18, 2012 in North America and one day later for Europe.

It is available on digital distributors such as the PlayStation Network, iTunes Store, Amazon.com, Steam, SoundCloud, etc.