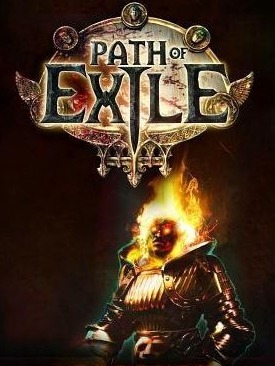 Path of Exile is a free-to-play action role-playing video game developed and published by Grinding Gear Games. Following an open beta phase, the game was released in October 2013. A version for Xbox One was released in August 2017, and a PlayStation 4 version was released on March 26, 2019.

The player controls a single character from an overhead perspective and explores large outdoor areas and caves or dungeons, battling monsters and fulfilling quests from NPCs to gain experience points and equipment. The game borrows heavily from the Diablo series, particularly Diablo II. All areas aside from the central encampments are randomly generated for increased re-playability. While all players on a single server can freely mingle in encampments, gameplay outside of encampments is highly instanced, providing every player or party with an isolated map to freely explore.

Players can initially choose from six available classes to play as (Duelist, Marauder, Ranger, Shadow, Templar and Witch). Each of these classes are aligned with one or two of the three core attributes: Strength, Dexterity, or Intelligence. The final class, the Scion, can be unlocked by freeing her near the end of Act 3, and is aligned with all three attributes. The different classes are not restricted from investing into skills not aligned with their core attributes, but will have easier access to skills that are aligned with their core attributes. Items are randomly generated from a wide variety of basic types and endowed with special properties and gem sockets. They come in different rarities with increasingly powerful properties. This makes a large part of gameplay dedicated to finding well-balanced and synergistic equipment. Skill gems can be placed in gem sockets of armor, weapons and some types of rings, giving them an active skill. As the character advances and levels up, the equipped skill gems also gain experience, allowing the skills themselves to level up and increase in potency.

Active skills can be modified by items known as Support Gems. Depending upon the number of linked sockets the player possesses, a primary attack or skill can be modified with increased attack speed, faster projectiles, multiple projectiles, chaining hits, life leech, auto-cast spells on critical strike, and more. Given limits on the number of sockets, players must prioritize gem usage. All classes share the same selection of 1,325 passive skills, from which the player can choose one each time their character levels up, and as an occasional quest reward. These passive skills improve the core attributes and grant further enhancements such as increased Mana, Health, damage, defenses, regeneration, speed, and more. Each one of the characters start on a different position on the passive skill tree. The passive skill tree is arranged in a complex network starting in separate trunks for each class (aligned with the permutations of the three core attributes). The player must therefore not only focus on maximizing all modifiers related to his primary offense and defense, but must also take care to select the most efficient path through the passive skill tree. As of the 3.0 Fall of Oriath Release, the maximum possible number of passive skill points was 123 (99 from leveling and 24 from quest rewards) and 8 respectively. Each class also has access to an Ascendancy class, which grants much stronger, specialized bonuses. Each class has three Ascendancy classes to choose from, except for the Scion, who only has one Ascendancy class that combines the elements of all other Ascendancy classes. Up to 8 Ascendancy skill points can be assigned out of 12 or 14.

Path of Exile is unusual among action-RPG games in that there is no in-game currency. The game's economy is based on bartering "currency items." Unlike traditional game currencies, these items have their own inherent uses (such as upgrading an item's rarity level, rerolling affixes, or improving an item's quality) and thus provide their own money sinks to prevent inflation. Most of these items are used to modify and upgrade equipment, though some identify items, create portals to town or grant skill refund points.

Hardcore (HC) – Characters cannot be resurrected but instead respawn back in the Standard league. This mode is analogous to permadeath in other games.

Other leagues are usually designed for specific events. They have their own set of rules, item accessibility and aftermath. These rules widely vary depending on the league. For example, timed "Descent" league features another map set, new monster sets and rewards, but characters in this league are no longer available for playing after the league ends. "Turbo solo immolation" leagues, as another example, are running on the same maps as standard modes, but with much harder monsters, no partying, replacing physical damage with fire damage and monsters exploding on death—and return the survivors to Hardcore league (while dead characters resurrect in Standard). Racing leagues last between 30 minutes and 1 week. The permanent leagues have counterpart ladder leagues with different rulesets that last three months.