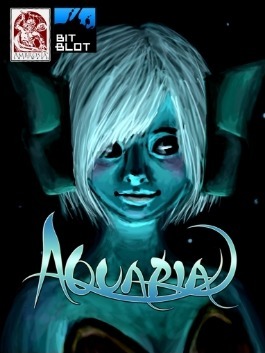 Aquaria is a 2D sidescrolling action-adventure indie video game designed by Alec Holowka and Derek Yu, who together formed the independent game company Bit Blot, which developed and originally published the game. After more than two years of development, the game was released in late 2007 for Microsoft Windows.

The game follows Naija, a mermaid-like woman, as she explores the underwater world of Aquaria. Along her journey, she learns about the history of the world she inhabits as well as her own past. The gameplay focuses on a combination of swimming, singing, and combat, through which Naija can interact with the world. Her songs can move items, affect plants and animals, and change her physical appearance into other forms that have different abilities, like firing projectiles at hostile creatures, or passing through barriers inaccessible to her in her natural form.

Reviews of the game were generally positive. Critics focused primarily on the visuals, music and atmosphere as being particularly praiseworthy. The controls and gameplay were also lauded, while negative critiques more often centered on the map system and limited variety of objectives. The game won the Seumas McNally Grand Prize at the Independent Games Festival in March 2007.

As the game opens, Naija has lost almost all of her memories, and is unaware of the world outside of her home as she "lives as a simple creature". The player is told this in voice-over narrations in the form of a story told by a future Naija. These narrations serve as the primary source of information about Naija throughout the game, though there are occasional cutscenes. After being confronted by a shadowy figure and being shown a series of flashbacks she does not understand, Naija awakens. Feeling loneliness as the only member of her species, Naija decides to explore the world around her. As the player explores, Naija discovers more and more about the history of the world, "Aquaria", and about her own past. The player is not forced to go through the plotline in a set sequence. The only limiting factor is physical barriers such as areas that can only be accessed by using a specific form. Combinations of these physical limitations place some plot elements later in the game. The narrative for the majority of the game is centered on Naija's exploration of a series of ruined civilizations that she finds, each with a large monster in them. These civilizations make up the different regions of the game.

Towards the end of the game, Naija discovers that all of the ruined civilizations she has found throughout the game were destroyed by a god, "the Creator", who was jealous of the rising power of that civilization or of their gods. The powerful monsters she has found and defeated in each region were once the gods of that civilization. Each of these civilizations had a unique power, symbolized by the form that Naija learns after defeating their former gods. Along with Li, a human diver from the land she meets at the top of the ocean, Naija then descends to the bottom of the sea to confront the god. There she discovers that the Creator fell into the ocean as a child, and bonded with an ancient spirit to gain god-like powers. He then created Aquaria, threading a verse of a lullaby his mother had sung to him throughout, the only part of the song he remembers. The melody of this song, the "verse", is what allows Naija to sing songs that affect the world around her; parts of the melody can be heard in different forms in the songs within the game's soundtrack.

The Creator, after creating Aquaria, created a series of civilizations, making a new one in turn when each one was destroyed. The Creator kidnaps Li, with whom Naija has fallen in love, and she attacks the Creator to get him back. The player defeats the god as the final boss of the game, and returns home with Li. In the epilogue, Naija is shown with Li and their child. If the player has found all of Naija's memories by discovering places she remembers, they reveal that the shadowy figure at the beginning of the game was her mother, Mia. Mia was made by the Creator and had the ability, like Naija, to use the different powers of all of the civilizations. She fled the Creator, and hid herself and Naija among several communities in succession; after the destruction of the last one she erased Naija's memory so that she would find out the history of Aquaria on her own and defeat the Creator. In the extended epilogue shown if the player has found all of the memories, Mia appears, telling Naija that the two of them can conquer the civilisations above the water. After Naija refuses, Mia kidnaps her, and vanishes; the extended epilogue ends with Lucien, Naija and Li's son, leaving to find her. If the player has not found all of the memories, the epilogue instead ends with Naija asking the player to find out about her past, and revealing that the narration of the game was intended to be heard by her son.