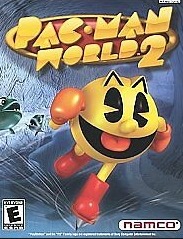 Pac-Man World 2 (パックマンワールド2 Pakkuman Wārudo Tsū) is a video game by Namco USA for Xbox, Nintendo GameCube, PlayStation 2, Game Boy Advance, and Microsoft Windows released in 2002. Like the original Pac-Man World, the player controls the character of Pac-Man in a 3D platform game.

Back in medieval times, the evil ghost king Spooky constantly terrorized Pac Land and the Pac People. To stop him, the Great Wizard Pac created a powerful potion to transform five ordinary fruit from Pac Land into magical Golden Fruit. Then, a brave, young Knight named Sir Pac-A-Lot battled and defeated Spooky and used the Golden Fruit to seal him under a tree in the center of Pac Village. In present time, the Ghost Gang decides to pick the Golden Fruit off of the tree without knowing Spooky is under it. Spooky escapes from the tree and commands the gang to follow him in a plan to eliminate all Pac People. The ghosts agree and steal the Golden Fruit. The next morning, after Pac-Man wakes up, Professor Pac tells Pac-Man to retrieve the stolen Golden Fruit from each of the ghosts and imprison Spooky again or else Pac Land will be doomed. Pac-Man travels through all four regions of Pac Land and across the ocean to Ghost Island, defeating ghosts and retrieving golden fruit along the way. He defeats the four Ghost Gang members, in which they individually use four machines and a submarine with all of the ghosts inside to try and defeat Pac-Man, who gets all five Golden Fruit. When he arrives at the Ghost Bayou on Ghost Island, he meets the Wormwood; the evil brother of the Golden Fruit Tree, and he goes through a maze that Wormwood had created to stop him from defeating Spooky. Pac-Man makes it through the maze, and as a result, Wormwood's fire inside of the hollow mouth of his trunk burns out and he dies. Upon returning to Pac Village, Pac-Man learns the true power of the Golden Fruit and uses it to defeat Spooky himself. With Spooky defeated and re-sealed under the Golden Fruit Tree, Pac-Man is congratulated by the residents of Pac Village, during which Chomp Chomp overhears the Ghost Gang planning to free Spooky again and gives chase.

The player begins with six lives. The game has 25 levels and 16 Galaxian mazes in six different environments. The plot involves Pac-Man finding five golden fruits that were stolen by ghosts. These fruits were vital to his town. Pac-Man must sometimes fight and defeat enemies in order to progress. At the end of each area is a boss. The boss is always a ghost in a giant machine (the fifth machine holds all four ghosts), excluding the final boss. There are many items to collect in this game including fruit, the traditional dots, and tokens. Each of the levels has eight tokens, as well as a single bonus token for achieving one-hundred percent completion on the level and another bonus token for completing the time trial. Because there are nineteen non-boss levels, and because the Pac-Village doesn't have a time trial, the player has to beat every part of the game with one-hundred percent completion except for possibly the last level if you accumulate one-hundred-eighty-nine tokens. Galaxians, which show up once in most non-boss levels, transport Pac-Man into a three-dimensional maze, akin to the classic arcade games. Not all levels contain all of the collectible items, nor do they contain the same number of each.

The tokens unlock old Pac-Man incarnations in the arcade in Pac-Village. Critics have described these games as "perfect emulations". These unlockable "emulations" are Pac-Man, Pac-Attack (The updated version from the Japanese Namco Anthology 2), Pac-Mania, and Ms. Pac-Man. Also unlockable is a jukebox, which enables the player to listen to the game's soundtrack, as well as a gallery of concept art. However, the GBA version doesn't have any arcade games, despite listing them in its copyrights when loaded.

After completing any non-boss level, the player can attempt a time trial. The goal is to work through the level as quickly as possible after hitting the stopwatch at the beginning. Various clocks have been scattered throughout the level where items used to be. Collecting these clocks allows the player to recover the indicated number of seconds by stopping the clock; however, time clocks will not accumulate, sometimes making it better to skip a "2" clock less than two seconds after hitting a "4" clock. Unlike the standard game mode, the player must start the level over from the beginning if Pac-Man dies at any point in the time trial.

By July, 2006, the PlayStation 2 (PS2) version of Pac-Man World 2 had sold one-million copies and earned two-million dollars in the United States. Next Generation ranked it as the fifty-sixth highest-selling game launched for the PlayStation 2, Xbox or GameCube between January, 2000 and July, 2006 in that country. Combined sales of Pac-Man World games released in the 2000s reached one-million-eight-hundred-thousand units in the United States by July 2006.