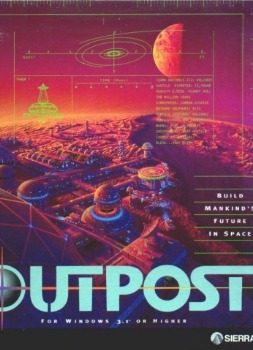 Outpost is a video game developed and published by Sierra On-Line in 1994. The game was noteworthy for having a hard science fiction approach, with one of the main designers being a former NASA scientist.

Outpost was released simultaneously for DOS and Windows 3.1, and was also released for the Macintosh. It was followed by a loosely related sequel, Outpost 2: Divided Destiny.

A massive asteroid named Vulcan's Hammer is detected to be on a collision course with Earth, and all attempts to divert it from this path have failed. The last attempt, firing a large nuclear warhead at the asteroid, actually ended up splitting it not into five chunks (which would have averted disaster) as humanity hoped, but rather two asteroids. Now, instead of destroying the earth, it will simply wipe out nearly all life on Earth's surface. Extinction is not an option, and so a mission is organized to create a colony on a world elsewhere in the galaxy as the last hope for mankind's survival. The player is in charge of that mission.

Initial reviews of Outpost were enthusiastic about the game. The American version of PC Gamer rated the game at 93%, one of its highest ratings ever for the time. It was later made known that the reviewers had in fact played beta versions of the game, and had been promised certain features would be implemented, but never were.

Indeed, many of the features described in the game's own documentation simply did not exist in the game at all. These included the ability to enter diplomatic relations with the rebel colony and the ability to build roads, orbital colonies, or the mass driver. Many of these gameplay aspects were later patched in, though in appearance only, as many of them failed to have any meaningful effect on gameplay.

Following the release of the game, the game's general bugginess and perceived mediocre gameplay, along with the lack of features described in most of the game's reviews and the game's own documentation led to a minor backlash against the computer game magazines of the time by consumers who bought the game based on their reviews.

Outpost can sometimes end abruptly, as players who choose the wrong star system in the beginning can find themselves in a star system with no habitable planets.

Sometimes, players will find the colonists on the planet dying en masse unexpectedly, thus causing the game to end when everyone has died. The colonists' death rate during this occurrence is one of exponential growth, following the equation 2^n, where n is the number of turns passed since the widespread death bug began.

The algorithm to calculate recyclable resources was also exploitable. If one built enough residential units, the resulting recyclables produced by the colony would be more than the resources going into the colony.

The game files contain information for several buildings which are not available during gameplay. This was a result of cutbacks made by the game's developers due to a rushed release date.

A player cannot build a working mass driver, as the option to create the rail is nonexistent. However, with update 1.5, some buildings were rehabilitated and a lot of improvements were made to the algorithm.