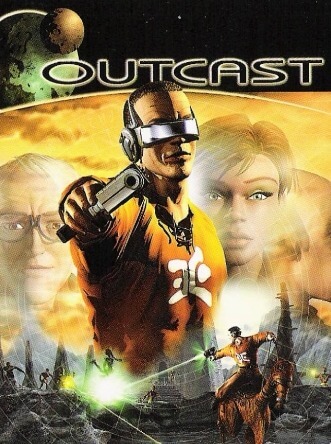 Outcast is an action-adventure video game developed by Belgian developer Appeal and released by Infogrames for Windows in 1999. The game was critically acclaimed and was named the "Adventure Game of the Year" by GameSpot in 1999. In 2001, Appeal developed a sequel, called Outcast II: The Lost Paradise, which was never finished due to bankruptcy. In 2010, the game was re-released via digital distribution on GOG. In 2014, Outcast was remastered as Outcast 1.1, after the original developers reacquired the franchise IP. In 2017, a remake titled Outcast: Second Contact was released for Windows, PlayStation 4, and Xbox One.

The player controls the protagonist Cutter Slade around the alien world of Adelpha in a third-person or first-person view, and only uses two mouse buttons; The right mouse button aims the player's weapon, and the other is context-sensitive (For example, standing in front of an NPC makes the mouse button initiate conversation, while running around has the mouse button make Cutter jump). The player can walk, run, jump, crawl, and climb onto virtually any ledge Cutter can reach with a jump.

Aside from the tutorial area, the player is free to move to any region of Adelpha as they please through the travel gates known as daokas. The player can drop teleport beacons from the F-LINK gadget to instantly move between areas inside a region, but these beacons do not work between regions. The player can also acquire a twon-ha (a beast of burden that can be ridden), which makes traversing the vast regions much quicker, either by simply buying one or doing certain quests that reward the player with one.

A large part of the game focuses on conversing with the friendly aliens known as the Talan in order to learn the story and history of Adelpha, and to progress in Cutter's mission to find the probe. While this can all be skipped, they treat the player differently depending on how the player treats them, through a reputation system; If the player performs many tasks to help them, they like them more and are more eager to help, whereas if the player does things that harm them they will become more and more angry with the player and aggressively dismiss them. There are multiple variations of dialogues which are selected either randomly or based on the player's reputation.

Each weapon in the game fires slow-moving projectiles, requiring the player to constantly maneuver to avoid the enemy soldiers' attacks, and carefully aiming so that the player's will connect. Alternatively, the player can sneak around the enemy, by use of standing behind cover, lying down in a muddy field, using gadgets that turn you invisible for a short time, and so on. Cutter begins the game with just a pistol and his fists, and the player can buy more weapons (and upgrades for those weapons) whenever they have the money, while ammunition can either be found in the world, or crafted by taking a certain amount of materials to a Talan known as a Recreator. Soldiers will sound different alarms with a horn-like instrument when they see the player, to give orders to others nearby. They will try to move behind the player in order to flank them, and search the area or call for a meeting when they can no longer find them. In addition to soldiers, the hostile and less intelligent Adelphan wildlife will also try to fight the player if they come too close.

The enemy soldiers can be weakened by performing a certain task for the leader of each region. When this is done, they will stop producing resources for the soldiers: stopping food production lowers their health, stopping the mining operations makes their weapons less powerful, etc. A good reputation is necessary to convince the Talan to stop production of resources, so the player is encouraged to be good to the Talan.

Outcast uses a unique way to save games, integrated with the game world. At the start of the game, the player receives an object called a "Gaamsaav". He is instructed that the Gaamsaav is able to "capture his essence", so that it may later be restored. To save a game, the player equips the Gaamsaav and "squeezes" it, making it glow and emit a sound. The sound can be heard by enemies and they will investigate, so that the player must take the situation into account before saving a game. After a few seconds, the game pauses and a menu overlay appears.

In 2007, the U.S. government successfully sends a probe to Adelpha, an alien world in a parallel universe. The probe starts transmitting video images of the world back to Earth. Then, just minutes into the mission, an alien life form discovers the probe and damages it, causing an unforeseen backlash of energy that creates a black hole, threatening Earth. After being briefed on the situation by his old friend Major Vernon, former U.S. Navy SEAL Cutter Slade is given the job of escorting three scientists (William Kauffmann, Anthony Xue and Marion Wolfe) on a mission to this alien world to repair the probe and close the black hole. Arriving in Adelpha, Cutter is separated from the three scientists and, to his surprise, is hailed by the natives as their messiah, the Ulukai.

The main population of Adelpha are a bipedal species called the Talan. Their technology is comparable to those of ancient China or medieval Europe, however they have psychic abilities that vary depending on each Talan's "essence": fire, earth, water, or spirit. Talan soldiers with the fae (fire) essence use energy weapons that are powered by their psychic abilities. Adelpha is split into several regions that are connected by a system of intercontinental portals known as daokas. These are relics of an ancient civilization, about which the Talan know little. At the time of Cutter's arrival the fire Talan have taken over society and rule through violence and intimidation. This is a relatively recent state of affairs; previously the Talan lived in harmony.

As the game progresses, Cutter learns that the four members of the expedition were separated not in location, but in time. Marion arrives shortly after Cutter, but Kauffmann and Xue arrived decades earlier, and the original probe hasn't arrived yet. Upon learning of their predicament Xue became unstable, fell out with Kauffmann, and took over the Talan warrior caste, teaching them to be violent and xenophobic. This directly led to a Talan warrior attacking the probe on sight when it arrives, causing the creation of the black hole that threatens the Earth. Kauffmann realised that he couldn't stop Xue, and started the cult of the Ulukai among the non-warrior Talan before his death, preparing them to help Cutter when he arrives.

Cutter weakens the warrior Talan and unites the other castes, and ultimately defeats Xue and his warriors. With Marion's help, he retrieves the lost computer cards needed to repair the probe. Marion is killed by Xue before the repairs can be completed. Following instructions left by Kauffmann, Cutter repairs the probe and strips down its internals so he can use it as a vehicle to return to Earth, where the return of the probe was expected to close the black hole.