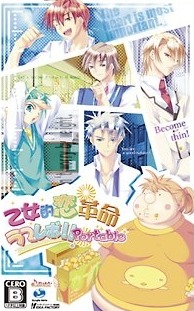 Otometeki Koi Kakumei Love Revo!! (乙女的恋革命ラブレボ!!, Girlish Love Revolution Love Revo!!) is an otome game originally released in 2006 for the PlayStation 2. A manga adaptation has been made, and the manga is published in English by Yen Press as Ugly Duckling’s Love Revolution. There are also drama CDs based on the story.

Love Revo takes place over a school year and works on a 3-day block basis where the player decides what actions to take for the next three days (one if it is a Sunday or a holiday). The player can choose to spend the whole day, or divide her day, using half the time for studying in school. The actions vary for each choice; if the player chooses to use the whole day, the actions follow as study, literature, science, and physical education. Whereas when the player choose to use half her day to study, after she may explore, eat candy to relieve her stress, diet, go to the club, and so on. On holidays and Sundays, all actions are available including going on a date with guys.

The main character, Hitomi Sakuragawa (桜川 ヒトミ) (default name, changeable), was once a cute, beautiful girl, winning beauty contests in childhood. However, after losing to the temptation of junk food received from fans, she has steadily gained weight... until she reached 100 kg in her second year of high school. At the beginning of the school year, the main character and her brother moved into her father's mansion-like dorm. She discovered that the school's most popular guys are also moving in. Their impressions on her shocked her into starting a diet.

Dieting is a half-day option on normal days and accumulates the most stress. The player can lose weight through exercises, by using equipment, or consuming slimming products. Each activity is given a star value and the player can only use up to certain values on different days. As a result of dieting, Hitomi will gain stress. In order to reduce stress, the main character has to consume snacks and foods which, sometimes, depending on the food, may increase weight.

There are many shops and facilities that Hitomi can visit in the game. By using these shops to her advantage the main character can purchase snacks, dieting products, equipment and services like facials.

For each male character there are two endings: a love ending and a friend ending. In addition, there are two extra endings: one where Hitomi successfully diets but fails to win a boyfriend and one where she fails to diet altogether.

An English-language fan translation patch was made for the Nintendo DS version of Otometeki Koi Kakumei Love Revo!.