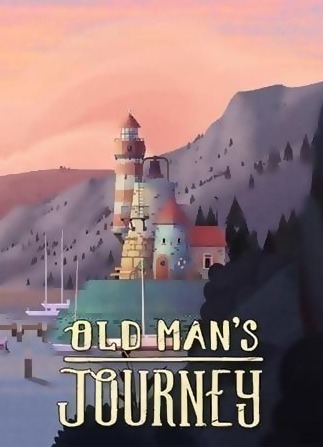 Old Man's Journey is an adventure video game developed and published by Broken Rules. The game was released for Android, iOS, macOS and Windows in 2017, the Nintendo Switch and PlayStation 4 in 2018 and the Xbox One in 2019.

The game follows the trip of an old man, which starts to travel after receiving a letter containing sad news. Through the game, some semi-still flashbacks explain the past life of the man.

The player controls an old man using the mouse, clicking on the places to reach. To allow the character to reach them, the player needs to modify the landscape: it's possible to "drag" hillocks -except the part of the scenery where the man is currently standing- to make them taller or shorter, within a predetermined range; when the edges of the hillocks fit, it becomes possile for the old man to pass from one to the other, even if one is in foreground and the other one is in background. Sometimes additional items are part of the puzzles, such as sheeps which have to be moved away to let the character pass. The trip is by walking for the most, but sometimes it does involve some means of transport; also in this case, the player may need to solve some environmental puzzles allow them to move ahead. At times, the old man does sit down to rest, and the player has to find the right item in the scenery which does trigger a memory in him, this way reconstructuring the man's story through semi-still images, as the game does not use dialogues.