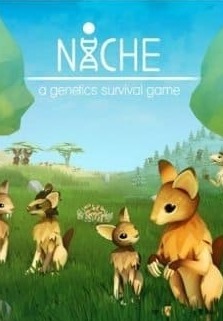 Niche: A Genetics Survival Game is a indie simulation video game developed and published by Stray Fawn Studio, and was released on Steam Early Access for Microsoft Windows, Mac OS, and Linux-based systems on September 15, 2016 after a successful Kickstarter crowd-funding campaign. Its main aim is to breed certain traits or genes into a group of canine or feline creatures to make the pack genetically perfect for its environment. The game is highly reminiscent of real life, as natural selection is key to carry on the pack, with the most fit genes.

The game was crowdfunded on Kickstarter. It was inspired by Creatures, Spore, and Don't Starve. It is available on Steam in early access. The world and all the animals are procedurally generated. The game was released out of early access on 21 September 2017.

There are several main characters in the game, and as it develops, more and more characters will be added.

This character is the main animal that the player will see when they first go on to the game. It can be described as resembling a dog, cat, squirrel, deer, goat and many others combined. It is a quadrupedal animal which is an omnivore, and varies in speed depending on what genes it possesses. The creature can have a variety of looks, and can also vary in size, for example, a large creature can have more protection against colder weather then a smaller creature. It ages naturally, gets sick and eventually dies. If this happens, it will leave a skeleton on the ground that disappears after a few turns. they are sometimes referred to as Niches or Nichelings by the fanbase.

This creature's aim is to kill all creatures including rabbils and the main creatures. Once killed, the Bearyena vanishes leaving 10 pieces of meat to collect. It is a large animal, having dark brown fur and black eyes. It also ages naturally and dies eventually. Occasionally, a young and friendly Bearyena will appear with its parent. This young Bearyena can be befriended and eventually bred with as it grows.

This creature typically spawns near berry bushes to eat the berries, it can be eaten by the main creature. When it dies it drops 3 meat points ready to be collected for consumption. It is a rather small animal, making a squeak noise when it moves. It has a pure white fur and black eyes. It spawns a small mound of grass in the ground.

These creatures spawn out of holes randomly placed in the grass. They look like grey moles with small tan antlers on their head, and are only seen from the hips up (because they always sit in the hole.) Every time you move one of your main creatures, the Stagmole will turn around inside the hole. If it sees them approach, it will cry and disappear down the hole. Even when it's in the hole, it is visible in "smell" mode.