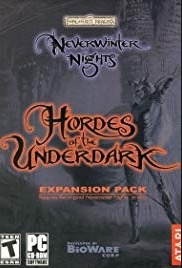 Neverwinter Nights: Hordes of the Underdark is an expansion pack for the role-playing video game Neverwinter Nights produced by BioWare and published by Atari, Inc. The followup to the Shadows of Undrentide expansion, Hordes of the Underdark adds a campaign, prestige classes, and other features. The Windows version also includes new scripting options for the Aurora toolkit.

Hordes of the Underdark includes six new prestige classes: Pale Master, Shifter, Weapon Master, Champion of Torm, Red Dragon Disciple, and Dwarven Defender. The game also adds the ability to hire two henchman at once and increases the maximum attainable character level to 40. The game normally uses the same third-person perspective as the base game and first expansion pack, but switches to a first-person perspective when traveling underground.

Hordes of the Underdark continues the story of Shadows of Undrentide. While in the plane of shadows, the player character finds an artifact called the Relic of the Reaper, that transports them to the Realm of the Reaper if they are mortally wounded, preventing them from actually dying. The player character escapes the plane of shadows, and stays for a while in Waterdeep. Soon, it is discovered that the drow, residents of the Underdark, are using the Undermountain under Waterdeep in an attempt to invade the surface world. Since the Undermountain is supposed to belong to the wizard Halaster, who hates the drow, an ex-adventurer named Durnan asks the player character to investigate.

Hordes of the Underdark received generally positive reviews. GameSpot reviewer Andrew Park called it "a solid expansion pack that adds a substantial single player campaign and interesting new options for multiplayer enthusiasts". According to GameSpy, "After the competent, but ultimately pedestrian outing that was Shadows of Undrentide, BioWare came roaring back with this stellar expansion". Chris Chan of New Straits Times thought the graphics were good, but that they suffered from performance problems due when many effects occurred simultaneously. He also took issue with the pathfinding for characters, and found the transition from first person to third person jarring. He said he expected more from the third part of the game's story, and while he enjoyed the game, he felt it was not BioWare's best work. Ure Paul of mania.com comments: "On an overall note, Hordes of the Underdark offers a considerably more rewarding experience than the Shadows of Undrentide and, therefore, deserves an honorable place in your RPG collection. It presents enough improvements to the NWN franchise to satisfy its ever-growing community of devoted players. After you're done, you'll most probably get the incentive to try it again with another new prestige class."

Hordes of the Underdark was a runner-up for Computer Games Magazine's "Expansion of the Year" award, which ultimately went to EverQuest: Lost Dungeons of Norrath.

(0) Comments on "Neverwinter Nights: Hordes of the Underdark Full Version"