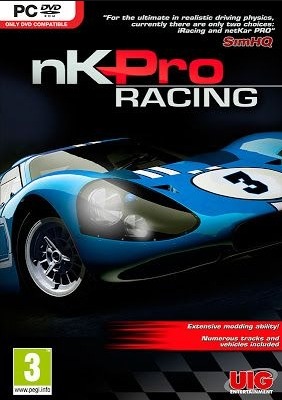 netKar Pro (also stylized as nKPro) is an online racing simulator that is developed with an emphasis on realism. It provides advanced features such as a complex tire model (visible dirt, tire wear and flat spots, that influence the car's handling) and a fully interactive cockpit such as those seen in flight simulators.

The success of its free predecessor netKar Namie and the anticipation created by previews of netKar Pro in the press led to high expectations from the sim racing community. However, this initial release and the subsequent patch were affected by many bugs hampering gameplay and therefore were received reluctantly by the sim racing community. In the summer of 2006, it was announced that netKar Pro and BallRacing Developments Ltd - developers of hardware and software for the professional race driver and sim racing community - have joined forces "to co-develop the next generation of motorsport simulation".

BRD are using netKar Pro to help with the running of their Formula BMW team, as their version of netKar Pro has a Formula BMW car programmed in it, though it is unlikely the public will ever see this car. Also, they are running a version of the Osella PA-21 car and Hill Climb addon, which at some stage will be made available to the public.

In October 2006, the netKar Pro development team released version 1.0.2, a patch that improved the multiplayer experience and fixed several other bugs present in the previous two versions. However, version 1.0.2 still had issues. The online racing community for netKar Pro is less active than other sim racing games, and contact with the developers has been sparse.

Jaap Wagenvoort - a member of the online netKar Pro community - has been issuing Community Updates on many forums, trying to help improve communication problems between customers and Stefano Casillo, the game's main developer. Version 1.0.3 of the simulation was announced immediately after the release of 1.0.2, but its release was delayed multiple times due to other projects and technical problems during the development. The other projects also helped to improve netKar PRO as it allowed the development team to validate the simulation data with Formula One engineers.

During the development of version 1.0.3, a lot of infrastructure-related problems were identified and required solving in order for version 1.0.3 to finally be what the simulation originally set out to be. On December 28, 2008, version 1.0.3 of netKar PRO was released, over two years after the previous release. This was a free upgrade for existing customers.

Version 1.0.3 improved the multiplayer experience and increased the stability and performance. Also, new features were added like an anti-join-lag feature. Much to the pleasure of the community, flat-spotting was also reintroduced to the simulation. Version 1.0.3 was positively received by the sim racing community.

Casillo has been quiet about further developments. He confirmed Kunos Simulazioni is committed to continuing development of the 1.x branch to avoid disappointing existing customers, while at the same time pointing out the shortcomings of the technology in the current netKar Pro, which would make it very hard to add new features. There have been earlier and repeated indications that Kunos Simulazioni has another, more modern and flexible engine in the workings, possibly already deployed in side projects such as a simulator developed for use in Italian driving licenses schools. However, it would seem this technology will not land in a netKar branded product any time soon.

Other points worth noting are:

There are no plans to update the graphics engine in netKar.

3D trees and real-time lighting are not technically feasible with the current technology.

An auto-banning feature may be implemented at a later stage; it is not clear which conditions would trigger it as Casillo stated things like detecting corner-cutting are too complicated problems to solve.

The game comes bundled with 5 tracks, and a further 21 are available to download. Some are real, with the rest being fictional.